From Old School RuneScape Wiki
Jump to navigation Jump to search
The RuneScape Wiki also has an article on: rsw:Zogre Flesh Eaters

Zogre Flesh Eaters is a Feldip Hills area quest in which you must venture into the crypts of Gu'Tanoth, an ogre resting ground, now crawling with undead zombie and skeleton ogres.

Recommended: A teleport out, a weapon and food, especially for lower level players.

Speak to Grish, located at Jiggig (south after crossing the connecting bridge to Castle Wars) near the fairy ring code BKP. He will talk about Zogres (zombie ogres) coming from the ground and making people sick. Ask if you can help, and progress through the conversation. Grish will give you two Super restore potions and three cooked chompy birds.

Talk to the Ogre guard to the east. After mentioning Grish, he will remove the barricade to allow you inside the Zogre-infested area.

Run east to a set of stairs going downward and descend these stairs. 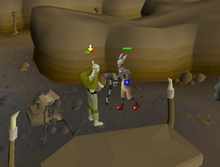 Note: You may now (or have already) become diseased if you are under 89 Combat and a Zogre or Skogre (level 44) attacks you. From now on, make sure you carry Super restore potions with you, because the disease will temporarily reduce a random skill by up to 10 levels every minute or so.

You may drop the rotten food immediately, and the knife after unlocking the coffin.

Proceed to the guest house, which is directly north of the Wizards' Guild, and then go to the top floor. Sithik is in the western most room (in the bed, does not appear as yellow dot on the minimap).

Talk to him, and he will deny any connection to Zogres. When you raise allegations, Sithik will challenge you to prove he is guilty.

Search the drawers, the cupboard and the wardrobe in Sithiks room. You will find a Book of portraiture, a Necromancy book, papyrus and charcoal, and a Book of 'h.a.m'. Read all three books. Do not drop the tankard as you will need it shortly after.

Use the Book of Portraiture on Sithik. He will recommend trying portraiture for yourself. Draw a portrait of Sithik by using the papyrus on him. He will admire either the 'truth' or the 'honesty' of your completed portrait:

The two portraits won't appear the same in the inventory and the correct one, when examined, will read A classic realist charcoal portrait of Sithik. 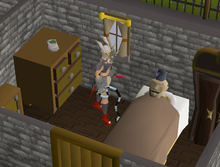 Sithik is turned into an ogre.

Take the portrait and the tankard back to the bartender (First use the tankard on the bartender and then the portrait). The bartender will recognise Sithik as the wizard seen with Brentle, and will sign the portrait as an affidavit. Go back to the Wizards' Guild and talk to Zavistic Rarve or ring the bell outside the door. Use the Necromancy book, the Book of 'h.a.m.', the tankard, and the signed portrait on him, which will be enough evidence to convince Rarve that Sithik may be responsible for the murder. Rarve will give you a Strange potion, which he instructs you to use on Sithik. You need to talk to Zavistic Rarve and select the dialogue option to give him the evidence, otherwise he won't give you the potion.

Use the potion on the cup of tea on top of Sithik's dresser. Go down the ladder and back up to Sithik and you will find that he has turned into an ogre.

Talk to Sithik, and he will confess. Obtain answers to all three questions in order to make Relicym's balm and brutal arrows.

You now have a choice: Make Relicym's balm and brutal arrows, or skip ahead to 'Relocating the ceremonial grounds' and use Crumble Undead against Slash Bash.

Upon giving you the Strange potion, Zavistic Rarve will take the Necromancy book, Book of H.A.M., tankard, and portrait from you. After drawing the correct portrait, you no longer need the charcoal, and after poisoning the cup of tea, you can drop the sample bottle.

After Sithik Ints has revealed the secret to making Relicym's balm, having it on hand in the final fight will help tremendously. It is your choice to obtain this now; however, the quest can be done without it. The balm is also tradeable.

Relicym's balm is made by using a rogue's purse on a vial of water and then adding snake weed. Due to the time taken to get the ingredients (both are non-tradeable), some players may find it easier to purchase a Relicym's balm from the Grand Exchange.

To make the composite ogre bow, use a knife on Achey tree logs with some wolf bones in the inventory. Use a bow string on the unstrung bow to complete the bow (requires 30 Fletching).

To make the arrows, use a knife on Achey tree logs and fletch them into ogre arrow shafts (each log will give 2-6 shafts). Add feathers to the shafts (each shaft needs 4 feathers). Finally, use nails (made of any metal) on the flighted ogre arrow while having a hammer in your inventory.

Return to Grish and tell him what Sithik told you. Go through all available conversation options. (The bow CANNOT be equipped until this step has been completed!) After this he will give you a key which will give access to the ceremonial chamber to look for some 'old' items for him.

Return to the cave beyond the barricade and head west. There will be two successive locked doors, proceed through both of these and descend the stairs. Continue to the end of this long, wide room. Searching the stand will spawn the boss.

Slash Bash is weak to brutal arrows and the Crumble Undead spell. Other attacks, such as melee, are not effective as they will only hit up to 25% of the normal max hit. He also drains Prayer rapidly. Prepare accordingly, and don't forget to bring a Relicym's balm to remove disease. 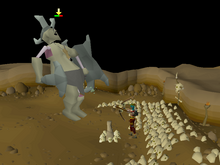 Attacking Slash Bash from a distance.

A level 111 Zogre named Slash Bash will attack you. The boss can be safespotted, however you can still be attacked by his range attacks. Use the safespot (pictured right) and kill the Zogre while having on Protect from Ranged. It is possible to use melee on the boss, however it will require using more resources and time since the damage is reduced against him.

It is possible to take too long to kill him, in which case he says something about growing weary of the fight and that he is awaiting a real challenge. You will have to start the fight over if this happens.

After Slash Bash is defeated, collect the bones and the ogre artefact that he drops. The three ourg bones that Slash Bash drops are worth about 32,262 coins each.

Note: While you're here, if you've started Rag and Bone Man II, it is recommended to take advantage of your supplies and kill Zogres until they drop the zogre bone.

Return to Grish with the ogre artefact for your reward. 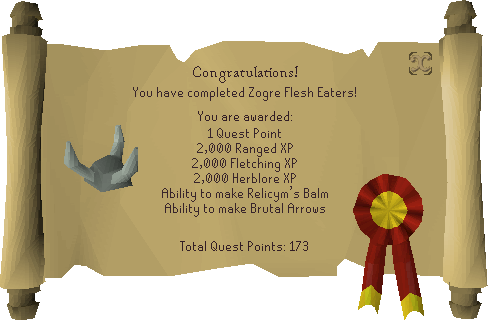 Bonus: Take the black prism to either Zavistic Rarve in the Wizards' Guild for 2,000 coins or to Yanni Salika in Shilo Village for 5,000 coins.

Completion of Zogre Flesh Eaters is required for the following: