From Old School RuneScape Wiki
Jump to: navigation, search
The RuneScape Wiki also has an article on: rsw:Zombie Champion's scroll 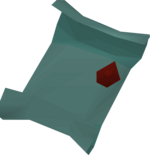 The zombie champion scroll is an extremely rare drop from Zombies. It contains a challenge from the Zombies Champion. In order to be eligible to receive the scroll, players must be on a members server and have 32 quest points.

By bringing this scroll to Larxus in the basement of Champions' Guild, players may fight the Zombies Champion as part of the Champions' Challenge minigame. During the fight, players can only use melee or ranged attacks.

The Graveyard of Shadows in the Wilderness is the best spot for obtaining the scroll, due to the amount of zombies that reside there. A good place outside the Wilderness to collect this scroll is the basement of the Wizards' Guild in Yanille (requires level 66 Magic; boosts allowed). The zombies are in a cage and need to be fought with magic or ranged. Bring runes for combat and telegrab.

The following text is transcluded from Transcript:Zombie champion scroll.

You come to Champions' Guild, you fight me, I squish you, I get brains!