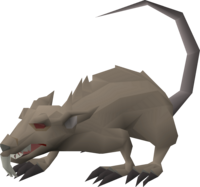 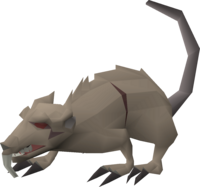 A zombie rat is a monster only found in Melzar's Maze. There are two sizes (normal size and the larger size), but both have the same stats. The zombie rat is quite similar to the giant rat except with a few cuts, gashes, and a washed-out colour. There are also several other undead monsters in the maze - such as zombies, skeletons and ghosts. When killing these rats in Melzar's Maze, they may drop a red key. Players may choose to equip a salve amulet as it gives bonuses against undead monsters.