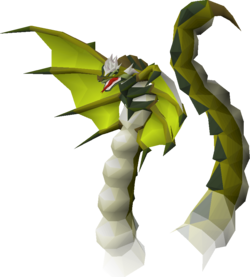 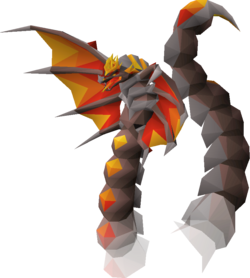 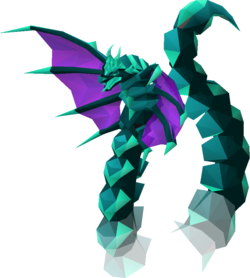 Zulrah is a level 725 solo-only snake boss. Players can only harm it with Ranged or Magic; though Zulrah can be reached with a halberd, it is immune to melee attacks. In order to access Zulrah, players must have completed Regicide to the point of reaching Port Tyras.

Before the player can fight Zulrah, they must speak with High Priestess Zul-Harcinqa first and offer themselves as the sacrifice in place of the gnome child, as Zul-Gwenwynig will prevent the player from boarding the boat until Zul-Harcinqa allows them to be the sacrifice.

As described in the stained journal, Zulrah was created during the Dragonkin Conflicts as an experiment by an unnamed dragonkin living in the Poison Waste. Originally seen as one of many failures, Zulrah was discarded into the swamp, where it grew into an unexpectedly powerful and intelligent serpent. It was found once again by its dragonkin creator, who named it "Zulrah" before eventually being eaten by their own creation.

Sometime during the Fifth Age, Harcinqa's mother, Harcinqa, her daughter, and Rentos, her son, visited the Poison Waste. On 5th Bennath, a group of men, Ohn, Mortarium, Onan, and several others, attempted to escape the elven clans by running south to the Poison Waste. With no food to eat, they attempted to fish for eels in the swamp, to no avail. With no luck on catching food, they decide to camp out with the gnomes.

Two days after, Zulrah appeared during the night and ate five of Ohn's men before the group could get to their senses. The next day after that, Harcinqa's mother attracted Zulrah's attention with a giant campfire, and held out her son, Rentos, which it devoured immediately. The gnome woman was able to bargain a deal with Zulrah, promising to send it sacrifices and worshipping it as a god if it did not wipe the whole group out. Zulrah simply slithered back into the swamp. The next day, Ohn's men began catching eels, which was interpreted as Zulrah agreeing to the deal. As the village of Zul-Andra was quickly formed; coincidentally, the woman decided to call it Zulrah, which its Dragonkin creator had done thousands of years ago.

As a result, Zulrah is worshipped as a god, being given sacrifices at a whim; in return, it allows the village of Zul-Andra to stand. Around year 169 of the Fifth Age, an adventurer discovered the village and offered themselves as sacrifice to save a gnome child who was going to be sacrificed to Zulrah. Ferried to Zulrah's shrine, it emerged and attacked, but to its surprise, found that this offering was fighting back. Despite the use of its powers, the adventurer managed to defeat it, although it simply slithered back into the swamp to recover. 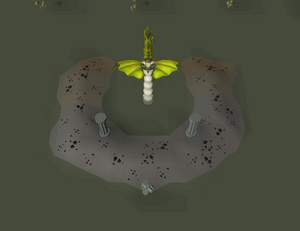 Zulrah is located at a shrine east of Zul-Andra. Players can quickly get here by:

All of these methods require completion of Regicide.

Zulrah's Shrine is accessed by boarding the sacrificial boat. Upon entering the shrine, a still scene of the shrine will be shown with a prompted dialogue. Zulrah will appear as soon as the player continues the dialogue or performs an action. The only way to escape from the shrine is by killing Zulrah, teleporting out, or dying.

Players can spectate a fight using a telescope located on an island north of Zul-Andra, which is accessed by using the fairy ring code DLR.

When a player defeats Zulrah, the drops will be received under the player, much like cave krakens. A Zul-andra teleport scroll will also be dropped near the player, which cannot be picked up but can be used to return to Zul-Andra. To fight Zulrah again after, the player must return to the shrine via the boat. 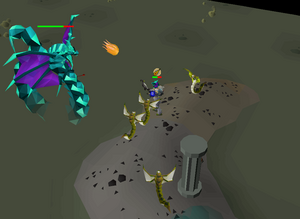 A player fighting Zulrah in its tanzanite form

The shrine is a small U-shaped island with two pillars in the middle corners, and Zulrah rotates in the swampy water around the island throughout the fight. It cannot be reached with melee (with the exception of halberds to which it is immune), making Ranged and/or Magic necessary to fight it. Damage at Zulrah is capped at 50, with any hits greater than this amount dealing anywhere from 45-50 damage.

Furthermore, it periodically switches forms that have varying resistance to Ranged and Magic, so using both is recommended. In turn, Zulrah attacks with Ranged and Magic, as well as an avoidable Melee attack where it targets the player with its tail, depending on its form. It can also summon snakelings, smaller versions of itself, on the platform to attack the player, along with toxic clouds that deal rapid damage if they stand in one.

Zulrah and its snakelings inflict venom with their attacks, an enhanced version of poison that increases its damage the longer it has affected the player, starting at 6 damage per hit and increasing up to 20. Standard poison protection will only reduce it to regular poison and will not grant any immunity; anti-venom or anti-venom+ or wearing a serpentine helm are much more effective for eliminating and preventing venom.

An overview of the fight's patterns

Zulrah has different forms throughout the fight, distinguishable by its colour, which designates its attack style and weakness. It changes forms by diving into the swamp and resurfacing somewhere else, which it does periodically. It may spawn snakelings and toxic clouds in any form.

The forms and when and where Zulrah spawns snakelings and toxic clouds is not random: there are four possible patterns for the fight that dictate what it will do next. It always starts in its green form and spawns toxic clouds to cover most of the arena, after which it is randomly chosen which of the four patterns the fight will be. Further information can be read on the strategy article.

Upon death at Zulrah, all items except the three most valuable will be held by the priestess at the Zul-Andra dock, who acts as an Item Retrieval Service. Items held by the priestess are permanently lost if the player dies an unsafe death before reclaiming them. Some specific anomalies may occur with some items.

Completion of the elite Western Provinces diary grants the player one free daily resurrection at Zulrah which restores all stats and allows the player to continue the fight from the current point if they drop to 0 hitpoints. This does not count as a death for purposes such as losing hardcore ironman status as it is considered a "safe" death. In order to benefit from this perk again, the player must log in after the daily reset time.

In addition to the 100% drops, the player will also have two rolls on Zulrah's drop table, excluding tertiary items, which have only one roll. The displayed drop chances represent a single roll.

Drop rates estimated based on 216,035 kills from the Drop Rate Project, unless otherwise cited.

There is a 1/256 chance of hitting the unique drop table per roll.[2] Zulrah gives two rolls per kill, meaning there's approximately a 1/512 chance per kill to receive a specific item from this table (or ~1/128 for any item). Below lists the approximate drop rates per roll of any specific item, which takes into account the fact that there are 4 different items in this drop table.

There is a 9/248 chance of rolling the rare drop table.