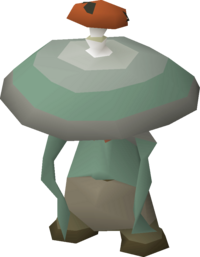 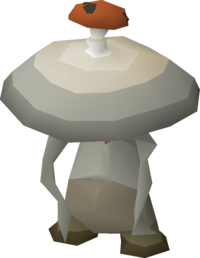 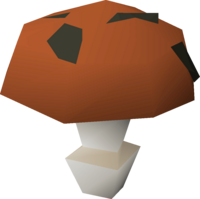 Zygomites, referred to as Mutated Zygomites by the Slayer masters, are monsters that appear as Fungi until provoked (Pick Fungi) that require level 57 Slayer to damage. They resemble giant mushrooms, and are found in Zanaris near the Cosmic altar (level 86) or the furnace (level 74) and ancient variants are found in Fossil Island. Players must use fungicide spray on Zygomites to kill them.

The Fungicide spray must be reloaded every ten kills. The reloads, Fungicide, can be bought from the slayer master or obtained as a drop from Zygomites. Players cannot sell the spray or reloads back to the slayer master afterwards, so only buy what is needed.

A player picking a fungi.

Zygomites mostly use magic-based melee headbutt which can hit substantial amounts, but they occasionally use more powerful magic-based ranged attacks by shooting spores. Dragonhide armour is strongly recommended while fighting them, as the high Magic defence will reduce the chance of them hitting you. If praying against their attacks, Protect from Missiles is recommended, as their ranged attacks are stronger and more accurate than their melee attacks.

Drop rates estimated based on 332,225 kills from the Drop Rate Project, unless otherwise cited.

There is a 5/137 chance of rolling the gem drop table.

Drop rates estimated based on 270,340 kills from the Drop Rate Project, unless otherwise cited.

There is a 4/140 chance of rolling the gem drop table.