This week we are implementing a new engine feature to be used in future updates as well as some tweaks to help resolve some uncommon technical issues.

While today's update is going to be a quiet one we do have a lot coming in the near future. Let's have a look at the progress on some of the big updates we have in store for the next few weeks.

The Grand Exchange is coming along nicely with the interface completely finished and a majority of the key functions working. While there is still a way to go with building up the environment and setting the starting prices for every item, the Grand Exchange is looking good for release later on in February.

Mod Ash has been regularly tweeting out updates on the progress of the Grand Exchange. Be sure to follow him for the latest! 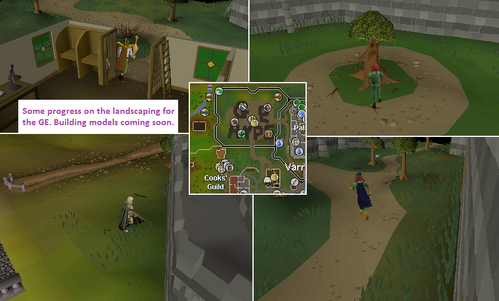 In order to ensure the release of free-to-play, the Grand Exchange and Achievement Diaries goes as well as possible we have moved the release of diaries to early March. This move will allow us to really polish and refine the update, making sure that it is everything that the Old School community expect it to be.

Keep an eye out for further updates on the progress of Achievement Diaries as we will be making sure to let you all know how they are coming along.

Permanent F2P is almost here. Only 1 week to go until you and all of your old RuneScape-playing friends can relive the adventure in F2P!

We've made a couple of tweaks to Lumbridge in order to account for the coming influx of players. The number of low level monsters in the area has been increased quite a bit to make sure that there is never a shortage of places to train at low levels.

We have a lot planned for the release of F2P. Keep an eye out for livestream after livestream over on the RuneScape Twitch.