This week we look at increasing the viability of the normal spellbook, improving the Preserve prayer, introducing upcoming balance changes, all in addition to a host of other polled content.

There have been calls to make Zamorak robes available to F2P players to fill a gap in magic equipment. We'd like to make monks of Zamorak drop Zamorak robes. This would make the robes accessible to F2P players, as they can be found in two F2P locations: the Asgarnian Chaos Temple and in Varrock Palace.

Currently the only method of re-obtaining the amulet of accuracy when the quest reward is lost is though trade. We'd like to offer Wizard Mizgog more stock, which he'd trade for a set of magic beads (black, red, yellow, white).

In recent weeks there have been calls for Castle Wars to be made accessible within F2P. This was met with a very positive reaction, and so we'd like to offer the chance for this to become a reality. We'd like to add a portal from Clan Wars would which teleport players to the Castle Wars lobby. All exits to Members-only areas would be sealed.

Whilst the niche mechanic behind the prayer offers a useful benefit, at present the Preserve prayer is largely under-utilised. To remedy this we'd like to increase the boost offered by the prayer to 50%, and lower the rate at which it consumes prayer points to 3 points per minute.

Since the introduction of pools within Player-Owned-Houses we've noticed that Nardah isn't quite the attractive destination it once was. With this in mind we'd like to offer unlimited teleports to the Slayer task-only Kalphite cave via the Desert amulet 4.

The ability to restrict the movement of other players is a core mechanic in PvP. We'd like to suggest two changes to the normal spell book which should improve its viability in combat.

We'd like to introduce a new spell, called Shackle, to the normal spell book. In essence it's a stronger version of Entangle. It will require level 92 Magic, and 5 Nature runes, 6 Earth runes, and 6 Water runes. It will bind players to the spot for 20 seconds, which is equal to the duration of being frozen by Ice Barrage.

The second change we'd like to offer is one which was recently made to Seasonal Deadman Mode. A change was made to the Protect From Magic protection prayer which no meant that it no longer halved the duration of the Bind, Snare, and Entangle spells. We'd like to offer the chance to see this change implemented in the main game too. Note that if Shackle is added to the game it would also apply to this spell. 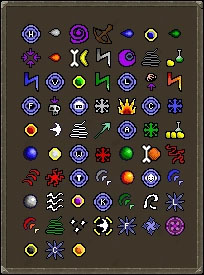 Pushing through the magical wheat found on Puro-Puro currently grants 2 Strength xp. We'd like to offer the players the ability to toggle whether or not to receive this xp.

The Magic skillcape currently offers a single spellbook swap each day. We'd like to bolster this perk by offering unlimited spellbook changes, but only as long as you're stood within a bank.

Since the release of the Blast Mine there have been requests to add an overlay, similar to that in the Motherlode Mine, which details the number of ore available to be collected.

With the recent changes made to the Mage and Ranged Void sets it seems somewhat suitable to offer a similar balancing tweak to the Melee set. We'd like to offer this in the form of a buff to the existing strength bonus of the elite Melee set.

There’s not so much risk when you fight an Ironman; they can’t pick up any loot you drop if they kill you, so you’re simply able to walk back and pick it up. We’d like to add a bit more risk to the encounter by making your tradeable loot be destroyed if it’s being dropped to an Iron Man who can’t pick it up.

You have long requested the ability to see whether there are players in the dungeon of the Lighthouse. We'd like to offer two methods of gauging the activity of the dungeon. The first would allow you to directly see the area, the second would add a Peek option to the ladder itself.

There have been calls to make fishing for karambwan more viable. We'd like to offer a solution which would help legitimate players obtain karambwan, whilst not alienating the Ironmen who rely on the stores to get them. We'd like to make raw karambwanji stackable within your inventory. Note that raw karambwanji must still be loaded inside a karambwan vessel as bait needed to fish for karambwan, but the loading is done automatically. Alongside this we propose a reduction of the stock found within Tiadeche’s Karambwan Stall. Currently there are 10 raw karambwan, we'd like to reduce this number to 5.

We've been thinking that we could do more to celebrate your achievements in-game. With this in mind we want to offer improved animations to make your levelling experiences more meaningful.

Both the normal and the superior mining gloves obtainable within the Mining Guild have been received extremely well. Within that reception has been a desire to see a new tier of gloves which possesses the effects of both. Naturally we oblige by offering expert mining gloves. They require 70 mining to equip and are obtained by combining the standard gloves and superior gloves at a cost of 60 unidentified materials.

Currently elite clue scrolls require 9-12 steps, which is more than the master clue, and significantly higher than hard clue scrolls. We'd like to reduce the number of steps to between 5-7 which we believe is more fitting to its tier.

The demand for more rock golem colours continues. Recently there was a request to allow daeyalt, elemental, and lovakite ores to be used to recolour the pet. Mod Ed has obliged by offering the below:

At present it’s only possible to store 65 ecto-tokens at the Ectofuntus. To help the viability of this training method (reduce the annoyance of having to collect tokens after so few inventories) we'd like to increase the limit to 1000.

The dwarves of Keldagrim recently stepped up their service offerings in the Blast Furnace by assuming certain roles in fixing the furnace, for a price. This week's poll sees the dwarves offering even more services (at a greater expense, naturally). We'd like to increase the cost of using the Blast Furnace on themed worlds to 72,000 coins per hour. In return the dwarves would repair broken pipes, cogs, and the drive belt, when needed.

Lizard Shamans found within the Shayzien swamp area have been a prominent topic in recent months. Safe-spotting the Shamans makes the kills far easier than initially intended. To combat this we'd like to propose a new cave, containing 8 Shamans, to be added underneath the swamp. Shamans in this cave would be attackable only if they are your Slayer assignment, and entry would be permitted only with 100% Shayzien favour.

You, the community, have been very vocal about the state of brutal black dragons. It has become apparent that the rate at which brutal black dragons are being farmed for resources is simply too high. In the coming weeks we will be implementing a requirement of 71 Slayer which is needed to kill them in order to manage this.

We've been racking our brains when trying to propose a reward for the completion of 100 master clue scrolls. We've found that we simply haven't been able to agree on any feasible outcome.

So then, we'd like to acquiesce to the creative and ingenuity of you, the players.

In the coming weeks we'll be seeking proposals from the community for a suitable reward for the completion of 100 master clue scrolls. Make sure we see your suggestions! Tweet suggestions @JagexRonan or @JagexSween, post them on the /r/2007scape sub-reddit, or post them in the Old School Content Suggestions forum.

If you needed more incentive to entering this competition, there is 3 Months of Membership on offer to the winner of the competition. Is this better than the universal adulation you'll get for winning? I'm not so sure, but have both.