The Slayer Tower is the quintessential killing grounds for PvM, but after 15 years it still has not been fully explored. 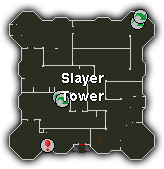 What resides atop the tower?

Thank you all for your feedback on the content of this blog. We've sat down and discussed what has come through, and have updated the developer blog with the following changes:

You can see the details of each change in the updated blog below. We will continue to follow your feedback, and plan to open the Grotesque Guardian poll later today.

Slayer bosses have always proved popular with our PvM community, but because of their high Slayer level requirements many of our mid-levels PVM’ers have been left wanting.

Gargoyles are one of the most popular Slayer assignments to receive. They're a true milestone in the skill, and are a lucrative task to complete.

By introducing a new slayer boss available at level 75, not only do we bring a bit more excitement to a Gargoyle task, but we can provide our community with the sustainable, mid-level Slayer boss that you have requested in the past.

Sculpted from Granite and mobilized with inscribed, black tourmaline hearts, the Guardians atop Vigorra’s Fortress were a testament to the talents of humankind.

As the tower fell to ruin, rising decay engulfed the fortress’s foundations, eating its way up, through stone and timber until finally, it enveloped and embittered the Guardians’ black hearts.

Legends say these Grotesque Guardians sit lifelessly, crumbling; disfigured by this corrosion. Conversely, chronicles dating back to the Zamorakian occupation of the tower describe thunderous footsteps trembling the roof on stormy nights.

For hundreds of years, the truth has remained elusive until recently, when speculation begun to arise about a lost entrance to the Slayer Tower’s roof.

When a player has been assigned a gargoyle slayer task, a rare, brittle key will drop from gargoyles on death. Brittle keys cannot be traded.

A Brittle Key will permanently unlock the Slayer Tower roof when it is used on the roof's door, located on the tower’s 2nd floor.

Once unlocked, and only when on a Gargoyle assignment, you will be able to face the Grotesque Guardians in place of regular gargoyles.

Creating granite-coated cannonballs is done by using granite dust on cannonballs. Combining the two has no requirements, and can be done with any quantity. It is not possible to reverse this.

Every kill against the Grotesque Guardians will result in a granite dust drop. The quantity dropped may vary, but each kill will provide a base amount.

Black tourmaline cores are rare drops from the Grotesque Guardians. They can be attached to Bandos boots to create Guardian boots.

Requiring 75 Defence to equip, guardian boots provide a strong defensive boost in combat, and offer a noteworthy counterpart to the offensive stats of primordial boots. 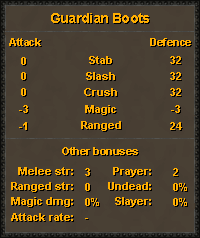 If you're looking for a defensive ring to wear in Old School, you've not got too many options at lower levels. We'd like to offer the granite ring as a drop from Grotesque Guardians.

The granite ring offers low defensive bonuses across the board, with the exception of a modest ranged defence which comes at the expense of magic defense. It requires level 50 Defence to equip. The ring can be imbued in the Nightmare Zone and as a result will see its stats doubled. 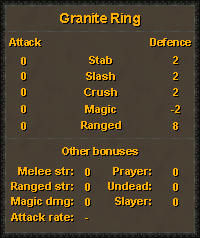 If you're struggling to find a ring, this one might fit the bill until you are able to get your hands on a ring of suffering. 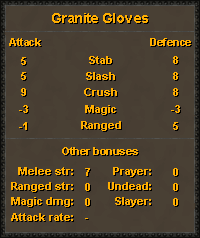 These stats place them quite close to adamant gloves, but unlike adamant gloves they require level 50 Defence to equip and have a bit more focus on crush and defence.

Requiring level 50 Attack and Strength to equip, the granite hammer is an excellent primary weapon for low level players. 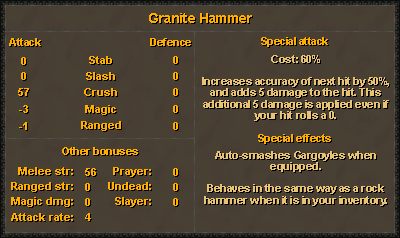 We'll be polling the Gargoyle boss on Monday next week. The following questions will be included in the poll:

If the Grotesque Guardians were to pass, we would be aiming for release late August.

As always, we are keen to hear your thoughts on the content of this post and are happy to make changes based on your feedback!

On Thursday, Mods Ghost, Kieren, Roq and Wolf did a Let's Design stream featuring the Grotesque Guardians. Over the course of the day Mod Ghost worked on a model for a guardian, as well as answering many questions about the content.

Please note: This stream was recorded prior to today's changes being made. Some of the details mentioned in this stream may not be fully up-to-date, and the content of this blog should be used as the most up-to-date source of information.

You can see the full recording of this stream below: