Two weeks ago we revealed that the next large content release that our project team (do read about the recent team restucture if you haven't done so) would like to offer is Making Friends with My Arm. Making Friends with My Arm is a Master level quest and is the next instalment in the Troll series, designed by Mod Ash himself. The quest was initially pitched to the community at 2016's RuneFest and was in response to a player suggestion to fill the black map zone near Ghorrock, and north of the God Wars Dungeon. Working with Mod Ash will be Mod Munro, one of our newer content devs, and he'll be taking the lead on programming the rewards.

Last week, we released the first draft of theMaking Friends With My Arm blog which detailed the quest itself, as well as our initial rewards proposal. Since then we've been working on changing the proposal to accommodate notable pieces of feedback. Below is a changelog highlighting major changes in the proposal since last week's offering. 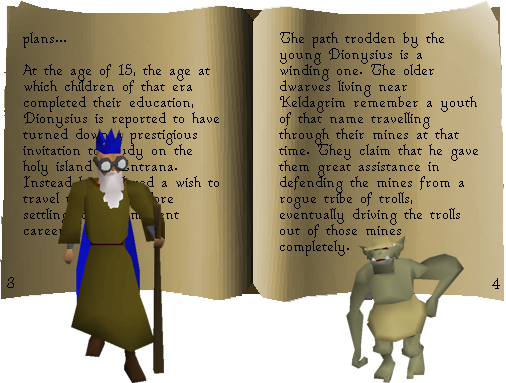 Making Friends with My Arm is a Master level quest, taking the much maligned character from My Arm's Big Adventure and sending him on a whole new mission - now venturing into the icy lands of the north to establish relations with the troll town of Weiss.

Players assisting him in this diplomatic foray will learn the troll technologies from Weiss that make the Firemaking skill useful, for the first time, offering buffs to skilling activities elsewhere in the world.

But first they'll have to handle My Arm's ambitions to woo the troll maiden Snowflake and to kill the Wise Old Man...

Completion of My Arm's Big Adventure

Must not be afraid of nasty trolls.

Completing Making Friends with My Arm will reward you with 2000xp in Construction, 5000xp in Firemaking, 10,000xp in Mining, and 15,000xp in Agility. Additionally you’ll gain access to a mine of different coloured salts. These salts are for treating logs that can be burnt in special fire pits; these fires will give various benefits while you’re training in their areas. The salts are tradeable, but you must complete this quest before you can use them. The mine also contains a mineral that can teleport you back to this mine, or to the Troll Stronghold for easier access to the rooftop herb patch you unlocked in My Arm’s Big Adventure. You’ll also get the chance to build a new disease-free herb patch in Weiss.

Each of these fires has a certain number of charges, determining how often it will grant its benefit before dying out; higher level logs will give fires with more charges, for players with adequate Firemaking levels. The treated logs are stackable, allowing you to re-ignite the fire without awkward inventory juggling. The first time you use a fire pit, you’ll need to bring a tinderbox, but you’ll automatically store that tinderbox within the fire pit so that you don’t need to bring one in future.

There are also special fire pits, marked with grey fire icons below, where all three salts are needed to light permanent fires that will give permanent improvements to the areas, such as mitigating the cold weather effects outside the God Wars Dungeon, or lighting up a dark cave.

The individual appearance and the status of the fire pits will be visible only to you. This also means that only you will experience the benefits of a lit fire. Similarly to a Farming patch, a player who hasn't lit a fire in that pit will not see one, and will gain no benefits from one lit by another player.

Once you’ve treated logs with Prayer salt, you can burn them in the fire pits marked with a BLUE fire icon on the map. This will give you double Prayer XP while you bury bones in the area around the fire pit, as long as the fire’s burning.

The XP bonus will also apply to the Bonecrusher when you use it in that area.

Prayer fire pits can be found at the following locations: the Fremennik Isles, Lunar Isle, near the Graveyard of Heroes, the Wyvern Cave, and Death Plateau.

Once you’ve treated logs with Stamina salt and some Stamina potion, you can burn them in the fire pits marked with a RED fire icon on the map. This will boost your run energy as you pass near the fire, consuming a charge from the fire each time you receive its benefit. Each charge will boost your run energy by 10, and also cause your energy to deplete more slowly for 30 seconds.

The effect is triggered automatically when you pass near the fire (around 8 tiles) provided your energy is not already being affected by this effect, and provided you’re not already near 100% energy. However you’ll be able to click/tap the fire manually to trigger its effect on demand if the automatic trigger isn’t what you want.

Stamina fire pits can be found at the following locations: near the Arceuus essence mine on Zeah, near the Cosmic Altar in Zanaris, Lunar Isle, near the Nature Altar in Karamja, at the entrance to the Ourania Altar, near the Herbiboar paths on Fossil Island, and nearby Falo the bard.

Once you’ve treated logs with Resource salt, you can burn them in the fire pits marked with a GREEN fire icon on the map. This will give you a 1/3 chance of gaining a double quantity of a specific resource when training in the area. Each time a resource is doubled, the fire consumes a charge.

Resource fire pits, and their corresponding resource, can be found on the map below.

The grey fire pits on the map provide unique effects based on their location. Grey fire pits require a brazier to be constructed before use, and require a one-off large deposit of treated logs in order for the fire to burn. The effects of the grey fire pits are permanent and the fire does not need to be maintained. The logs used to light the fire will have to be treated by all three types of salt.

The unique effects of the grey fire pits are as below: 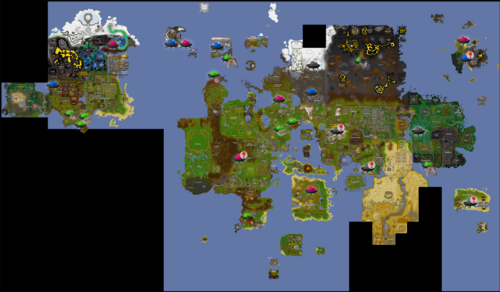 Click the image to see a larger version depicting the location of the proposed fire pits.
Poll Questions