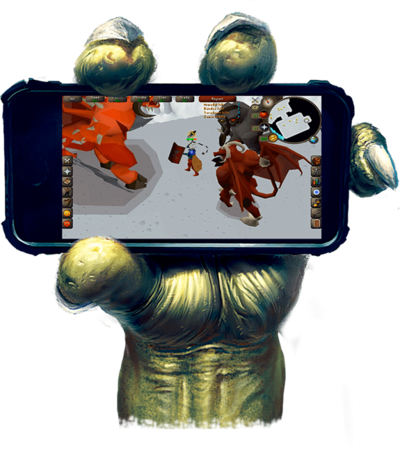 It has almost been a month to the day that we announced Old School was coming to mobile. Naturally you had a lot of questions surrounding the announcement of what is arguably the biggest thing to ever happen to Old School RuneScape. There has been a constant clamour to know more about just how it's going to work, and understandably so, porting an expansive MMORPG to a mobile device is an incredibly ambitious project.

Our core focus when porting Old School to mobile was recreating the authentic desktop experience designed by the Gowers. This blog will answer questions you might have regarding the game controls, it will also offer an insight into the considerations we've had in mind throughout development, and we'll also talk Beta testing.

When RuneScape was born, many of its controls were designed similarly to how you might interact with a webpage; with left-clicks to perform actions and right-clicks to create menus of actions, it was important that the game controls were intuitive and felt natural as back then you were playing within a browser.

We want to make OS Mobile feel as much like you’d naturally expect from a mobile app as possible; sliding in a direction to rotate the camera, pinching to zoom and quick touch gestures to interact with entities or open a menu.

One key difference between Desktop & Mobile is how a keyboard operates. Instead of a physical keyboard you have a digital one, appearing on demand in your screen space. Depending on how you like to play Old School, the keyboard can be totally irrelevant or incredibly valuable, so it’s important to us that the keyboard be both intuitive and available on demand for you. With that in mind, we’ll be making the keyboard automatically appear when you select a text entry field, such as the chat window, and have it be quickly accessible via a simple gesture, should you want it to for other scenarios like menu shortcuts. In addition, we’re adjusting and amending various interfaces and HUDs to ensure they are not covered up by the on-screen keyboard.

One of the biggest differences between the Mobile & Desktop clients is the layout of the main game screen interface. In our current iteration, we’ve moved the chat window to the top and split the side panel into two and placed the buttons on either side of the game frame, with the mini-map staying where it is.

The reasons for this are straightforward; native mobile keyboards can only appear from the bottom of the screen, meaning it would hide your chat window when visible; not ideal when it is the most likely place you’re going to type. We also considered how you would hold your mobile when playing Old School and how to maximize the amount of game world you can view, which led us to separate the side-panel. Having them split with the option to hide means they’re both in optimal positions to touch with your left or your right hand and meant that when collapsed you can see much more of the game. However, designs are not set in stone and the end result will very much depend on your feedback.

Once we’re in beta we’ll also be prototyping some additional features that should enhance the touch experience and we’re looking at various designs to ensure the functionality of features like shift-click to quickly drop items continues to be to possible on Mobile. 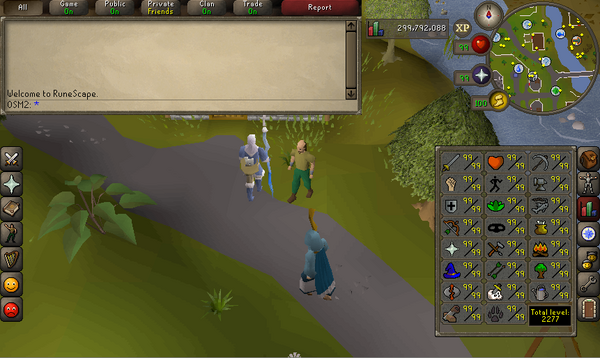 Here's a screenshot from a very early build of the mobile client. Note that the chatbox is expanded, as is the skills tab.

The world of Mobile & Tablets has resolutions ranging from 640 x 1136 to 1440 x 2048. On the higher resolutions with a smaller screen, the current interface sizes are rather small and can be difficult to accurately navigate with touch, so to address this we’ll be bringing Interface Scaling to both mobile and desktop, allowing you to select the size that works best for you.

Old School is not great at telling you what you’ve just done. When you click in the game world you’re met with a small X to indicate you’ve performed an action, which is either red or yellow. On desktop, this kind of works because it can be seen but when using touch, the X is generally hidden behind your finger. To address this, we’ll be prototyping several options for players to try out and give feedback on during the beta.
We’re still working on designs for these and will reveal more as we get closer to a beta release.

Weekly game updates are obviously a massive part of the Old School experience, and I know many of you are wondering how they’re going to work with the mobile apps.

Our weekly game updates will continue with Mobile and we have the process in place to have app updates readily available when the update is deployed, meaning you won’t be disadvantaged or lose out by playing on mobile. 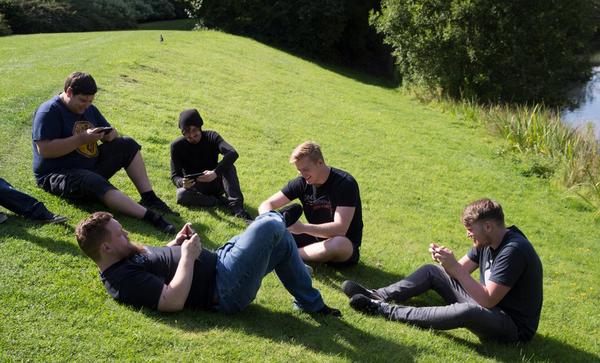 We don't do enough cheesy squad photos of the team. Here's one of us ignoring one another whilst scaping.

Whether you’re developing software, applications or games; compatibility is always a key consideration. For desktop computing, you must consider the operating system, such as Windows or Mac OS and the various versions, the processor power, memory usage and graphics power and you’ll almost always find a minimum spec for anything you can install. Mobile development follows the same principal; your main operating systems are Android & iOS, and you have a plethora of processors, graphics processors and amounts of memory to consider, which all vary by device, and as you can imagine – there are thousands of different devices!

We’ll be doing our best to ensure we have as much compatibility as we can. As with desktop, there will be devices that just don’t play nicely or don’t work at all, but we will be focusing on making sure the most commonly used devices are top of our list.

We’re also working to improve performance in the mobile app to target a broader range of devices, and these improvements will ultimately benefit the desktop client too.

So, the question I’m sure you all want to know the answer to, when will the beta begin?

Before we can start rolling-out a large-scale Beta, outside of getting the game into a good place we must update a lot of our supporting systems. These include systems like bot detection, player support portals and bug report queues and they all need to not only recognise that you’re on a mobile, but provide useful information like your device specifications.

Beyond that we’re working with the App Store providers to get the games approved, listed and available for beta; we’re almost there with Google Play and are in the early stages with the Apple App Store.

The Mobile Beta will be performed in the live game, meaning that if you’re invited, you can use your live account and make progress as usual in the live worlds with other players; so, it’s very important we get it right before opening it up.

If all goes as planned we’re looking to start rolling-out initial beta invites sometime after RuneFest this year; and once the beta begins we’ll continue to iterate upon it. Adding features, fixing issues and addressing feedback, all while adding more players with each iteration.

Beyond the beta there’s a lot more we can and want to do and we’re sure there’s a plethora of new features players will request for the mobile experience specifically... so your feedback has never been more important and we’ll be discussing these in future developer blogs! 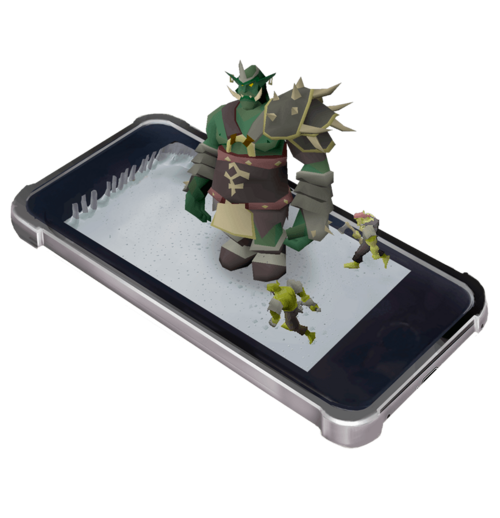