In Old School RuneScape's history, there's one major type of content that has never been added to the game. A new skill. We've offered a few throughout the years, namely Artisan, Sailing, and Warding, but none made it past the polls. We said we'd learn from our mistakes, and that we'd work with the community from the very beginning of the process to ensure that any proposed skill is a skill that is truly wanted.

We spent time understanding the players' biggest wishes from the game, considering the most popular features throughout Old School, and what could feasibly be made into a skill - hence we landed upon Pet Ranching!

What is Pet Ranching?

So... the first question on everyone's lips, what is Pet Ranching?

Pet Ranching is the act of collecting, training, and battling your pets. No longer will pets be mere cosmetic achievements!

What happens to existing skill and boss pets? We'll be taking them away, we feel pets are so loved, that they should be available to all, and through this skill, they'll be easily re-obtained, and they'll be much more useful to you.

Of course, Pet Ranching consists of a huge array of features (some of which we're detailing in this blog), but we'd like to work with the community to identify exactly where you want to take this concept. We think it has huge potential, and cannot wait to hear your thoughts. We'll begin the Pet Ranching journey with a very work-in-progress look at the skills guide, see below for more details. 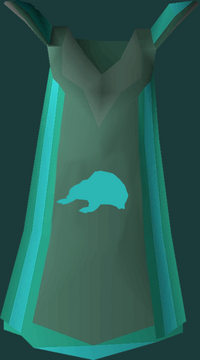 Heron: A long-legged bird that likes to fish. The Heron pet can have a dowsing effect on your opponents with water-based moves.

Phoenix: A fiery bird which rose out of ashes. The Phoenix pet can singe your opponents with fiery-based moves.

Tangleroot: A small living tree creature. The Tangleroot pet can savagely cut and snare your opponents with its grass-based moves.

Professor Magic Tree will also give a new tracking tool for all of the pets across Gielinor: the National Database of Enemies, Creatures and Known Species - or National DECKS for short.

If you want to get more pets, you will have to wander various areas of Gielinor - from forests to various dungeons and maybe you'll even find some in the desert! 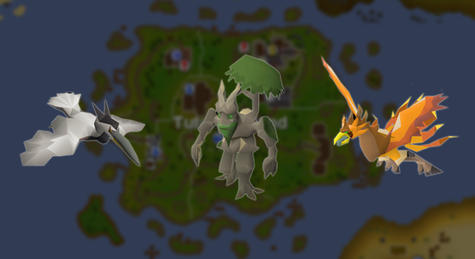 There are two things to note regarding storing pets:

You can store pets in your roster, and carry them around with you around the world, but the number you can carry is based on your Pet Ranching level.

Alternatively, you can store them in your Menagerie, which we'll make accessible from any bank via a device called a Pet Caller, or PC for short.

Finally, when obtaining a new pet in any way, there is an extremely slim chance (1 / 8192) of obtaining a special variation of your pet, with alternative colours.

Pet ranching will see the addition of the Daycare Centre to the town of Taverley. You'll be able to leave up to two pets here at anytime. The Daycare offers two awesome features for your pets:

Offline Training: When kept at the daycare, your pets will slowly become more powerful, obtaining new moves along the way - all whilst you go about everything else you'd rather be getting up to, such as slaying dragons or even sleeping IRL!

Breeding: If you keep two pets of the same kind at the Daycare, they may even breed which lets you obtain a baby form of the pet - how adorable! Don't worry if you don't have two of every pet, as we'll be adding a new shapeshifting pet that can breed with any other pet.

As ever, we're open to feedback, and we could consider opening multiple Daycares around the world, with varying level requirements if desired - please do let us know,

Now we're getting to the good stuff. Pet battling. Let's start with a few key details:

Each pet has a main type. Tangleroot is a grass type pet, Phoenix is fire, and Heron is water.

Each pet can learn a whole range of abilities which have various effects and deal damage to opposing pets. Each move has a main type.

Damage dealt will depend on the opposing pet's type, types have advantages and weaknesses, such as water beating fire. This is what is known as super effective.

Pets have HP levels which increase as you train them, like how your own HP level increases! This increases how much damage they can endure before dying.

Let's talk about finding battles. This can take place in multiple ways. This can be done by battling pets you encounter in the wild (you can either fight or catch these pets), you can battle against NPC Pet Ranchers found around the world, and lastly, we'll be adding the ability to do PVP Pet Battles. To enter a PVP battle, you must simply lock eyes with another player. A battle at this point is inescapable and must take place.

Now you're in the battle, the mechanics are extremely simple. Each participant will simply take turns selecting their action, be it to attack with an ability, or to attempt to catch the opposing pet (should it be a wild encounter). Choose wisely, strategic choices will be required in tough battles!

In the last few years we've seen the addition of two raiding dungeons to Old School: Chambers of Xeric and Theatre of Blood. Both have been fantastic additions to the game, with thousands of players playing both of these every single day. Something we really want to ensure is that each raid offers a different experience, and with Pet Raids we're confident we're offering something completely new.

This feature is for only the most accomplished Pet Ranchers, with the most powerful pets - but there are many raids and they vary in difficulty, so find the one suited to you!

The true Pet Raid - the hallmark of Pet Ranchers, if you will - is Gielinor's Ultimate Pet League. Conquer here and you'll become Champion of Gielinor! You'll be listed in the hall of fame, forever marked in history as the very best. That'll be no small feat. To even gain access to the Gielinor Ultimate Pet League, you'll need to have defeated all 8 regular Pet Raids which are found across Gielinor. They are found in 8 different cities and each is ruled by its own accomplished Pet Rancher, and challenging each comes with its own level requirement (see skill guide above):

Expect a serious challenge from the Ultimate Pet League. You'll come face to face with 4 of the strongest Pet Ranchers in all of Gielinor, known as the Leet 4. Beat these and you'll find yourself facing off against the current champion of Gielinor.

There will be a host of other smaller features coming to the game for Pet Ranching, and we've detailed some of the more important ones here.

Firstly, you'll be able to get a bicycle, due to the need to do much more traversal of Gielinor. You'll no longer need to carry around stamina potions, as you'll lose no run energy when riding your bicycle. You'll not be permitted to use it indoors. If you try to do so, then Professor Magic Tree will tell you not to. After all, there's a time and place for that. Pets can also ride on your bicycle, but may refuse - in that case you can simply poke em on.

Probita will also be offering a selection of pet toys to keep your pet's teeth nice and strong. She'll even offer the first for free, so make sure to pick a chew toy to suit your needs.

As with any skill, there'll be a skill cape to attain! Unlike other skills, we will not charge you 99k coins to acquire this cape. The PetsCape must be made directly from your pets, by using a knife to separate the hide. Watch out for easter eggs, though, as there's more than one way to skin a baby mole.

It's a good time to mention that your pet's abilities aren't only useful in battle, they can be used outside of battle should you have the required Pet Ranching level! Here are some examples, but we hope to add many more:

Baby mole can dig, taking you back to your respawn point.

Hellpuppy can burn trees, clearing your path - we know how much you hate those trees by that fairy ring.

A host of pets such as Heron, Phoenix, and Kree'arra Jr can fly, carrying you quickly to any city you want. We understand this may be considered overpowered - so it'll be limited to cities you've visited previously only.

Bloodhound can sniff out treasure, randomly finding items for you.

Kraken can surf, carrying you across water to new locations you've never reached before - Pet Ranching is everything Sailing could offer and more!

Abyssal Orphan can teleport you, meaning you don't have to carry runes or teletabs in your inventory. 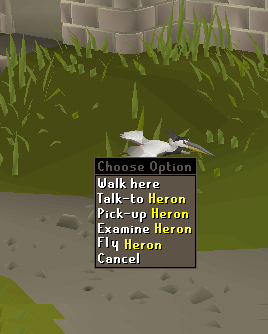 There are some other changes we'd like to make to Old School in the near future too, completely unrelated to Pet Ranching:

Purple Sweets have long gone underused, so we'll like to make them grant you 1 level up in any skill.

Quest dialogue has often been skipped, so we'd like to make text appear one word at a time in a newly designed chatbox which you aren't able to speed up.

We know how many of you hate runecrafting, so we're looking to add a new item called the 'XP Share', bind it to any skill you want, and half of any gained XP will go to that skill instead!

Old School has got a very special blood running through its veins – you, our fantastic players. And as with everything else, if you’ve got any ideas about the sorts of things you’d like to see with Pet Ranching then please do let us know!