Update:Dev Blog: You Are Here

Dev Blog: You Are Here

Mod Jenesis of the engine team has been hard at work creating the groundwork needed for a highly requested Old School update - and the time has come to put it to the poll!

We've let him take over this week's blog to provide some insight into the great work he has done.

Take it away, Mod Jenesis!

rather than increasing the rewards.

"I say, good sir, could you direct me to a public house?"

Finding the nearest pub in OldSchool should be a simple matter, but unless you've been playing the game long enough to have memorized the layout of Gielinor, or you're willing to peer at a very large image on our website, it's a tricky question to answer.

Being able to lay your hands on a pint of Asgarnian Ale to wet your whistle is clearly vital, and we've all seen crowds of thirsty adventurers wandering in circles looking for a drink and shouting "LITERALLY UNPLAYABLE".

Clearly something has to be done.

To that end, I've been spending time working away at OSRS's content system, editing tools, server, and client, in order to bring you... a portable keg pet an IN-GAME WORLD MAP!

It's been a fairly lengthy journey, so I thought I'd talk you through one developer's quest for a quiet drink in the Blue Moon Inn after a hard day's coding.

As an engine developer, my role is to provide the tools for the content team to build these features rather than doing these things directly, so as well as getting the map rendering in game I needed to build engine and scripting features to allow the content mods to build the map experience you want.

There already was a bit of code behind the scenes to deal with world maps. The map editing tool we use to build the world of OSRS had some worldmap functionality - it allowed you to scroll around the world and click an area to load the relevant map file, which is a bit easier than having to remember which file contains which bit of the world. It could also export the surface world to a big .png file, which is what we use to keep the world map on the website up to date.

Unfortunately, nothing else understood this world map, and the data format wasn't really suitable for in-game use. So stage one was to rewrite the tool that built the worldmap data from the individual map files. Then I had to get the Map Editor to understand the new format. I didn't quite get it right first time, as you can see... 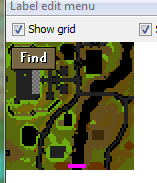 This is Lumbridge Castle, honest. Clearly lots of things are the wrong colour, and the observant among you will have noticed that it's upside down. Still, apparently my packtool does something. After this progress was fairly rapid. 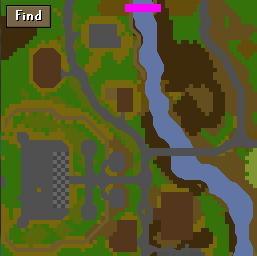 Things are roughly the right colour now (DON'T MENTION THE BRIDGE), although there's no ground blending. 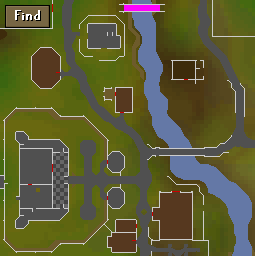 You'll notice that we're not just drawing the ground any more, but walls have made an appearance as well. This is good, but that bridge is still pink, and there aren't any pubs :(. 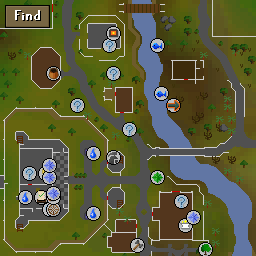 Now we're talking. We've got map scene icons (things like the trees and bushes), and what are internally called mapfunctions, which are the circular icons that will be familiar from the minimap.

Lumbridge Castle is disturbingly pub-free, but we should be able to see an icon for any pubs we come across. If only we could look at something beyond this 64x64 tile area... 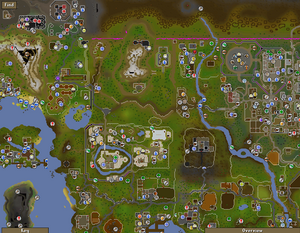 There it is! The Blue Moon Inn! Plus pubs in Falador, Port Sarim, Burthorpe, and the Barbarian Village. European monks used to take their brewing pretty seriously, but the ones on Entrana don't seem to be interested.

There are still a few problems, though - the quest start icon below Draynor Manor is partly missing, the wilderness ditch seems to have caught Pink Bridge Disease, and so on. 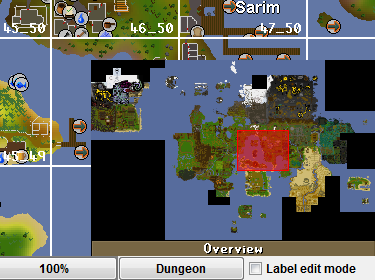 None of these were insurmountable problems, though, and pretty soon I had the Map Editor back to where it had been, complete with map labels (writing "Lumbridge" somewhere near Lumbridge, etc) and an overview.

So, we'll just stick it in the client and see how we get on shall we?

Putting the map into the client 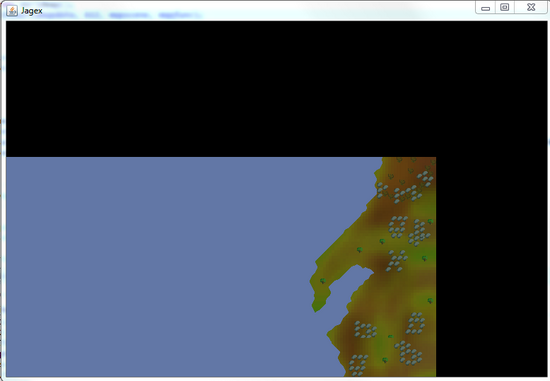 Actually, mostly it just needed some simple content work that I had no idea how to do, and with help from Mod Maz I soon had an interface in the game with the map on it, scrolling nicely. 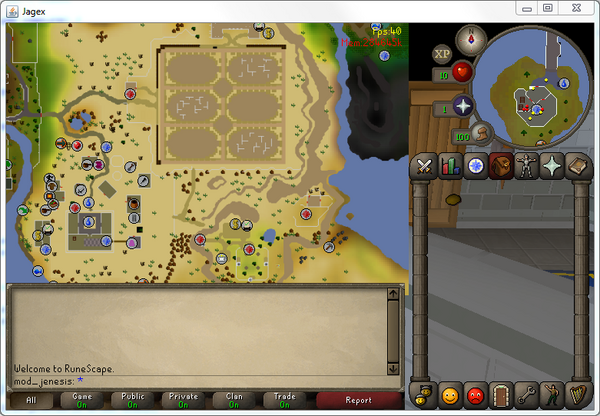 At this point, the map looks dangerously close to being done, but as ever with these things, the battle was only half over. The map was scrollable and zoomable, but you couldn't interact with it in any way.

The dream of being able to have a key for the icons where you could click on the pubs and make them flash to make finding them easier was still some way off.

This was where the work to make the map accessible from OldSchool's scripting system needed to happen. It took quite a while to add this, but eventually, one glorious day... 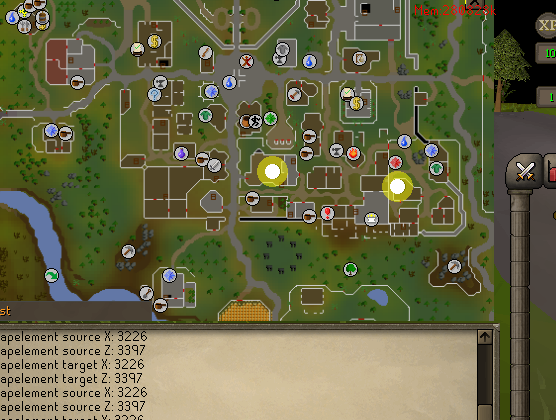 THE PUBS ARE FLASHING! If you can't find them at this point, you've probably had enough beer already.

Of course, after a few beers you inevitably fancy a kebab, so by grouping icons into categories, I made it possible to make the pub icons and kebab seller icons flash at the same time with a simple script command:

I added a few other features, like being able to make the pub icons disappear YOUSAIDYOU'DNEVERTALKABOUTTHATDAY and being able to tell when your mouse cursor moves over or away from a pub icon:

Since then, as the content devs have been implementing a proper worldmap interface, I've been busy fixing bugs in the new system, but hopefully they now have almost all of what they need to build the map you vote for, so get yourselves to a poll booth. I've highlighted them below: 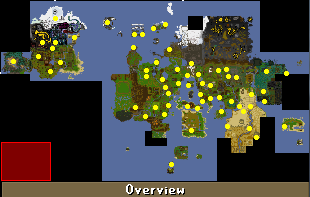 Thanks to Mod Jenesis' work on the world map, we'll be able to include it in a content poll starting early next week.

Of course, we'll be offering a number of other updates alongside it. This includes some minigame improvements, skillcape improvements & more!

Question: Should an in-game world map be added to Old School RuneScape? This map would display the surface world, as well as principal dungeons throughout. It will also feature a ‘You are here’ arrow, showing your current location. This map would be opened from a map icon located next to the minimap. This icon would be toggleable as a part of the minimap orb toggle. Opening this map will take substantially less time than the original world map introduced in 2008.

Question: Should skillcapes provide their perks when mounted in player-owned houses? Only the owner of a house would be able to utilise perks of a mounted cape. Perks would only be available for the following skillcapes when mounted: Construction, Crafting, Fishing, Fletching, Hunter, Magic, Strength, Herblore, Quest, Diary, Music and Max.

Question: Currently, the Achievement Diary Cape provides a total of 5 teleports each day. These 5 teleports can take you to any of the diary masters. Should this be changed to five teleports to each diary master per day?

Question: When the Herblore skillcape is equipped, should it be possible to create unfinished potions using grimy herbs? The experience for cleaning the herb would still be awarded. This perk would be in addition to those the cape already provides. This would also apply to the max cape.

Question: When equipped, the Prayer skillcape provides the effect of the Holy Wrench as a perk. Should it also provide this effect when it is in your inventory? This would also apply to the max cape.

Question: Should the Agility skillcape receive a daily perk which restores 100% run energy and provides the effect of a stamina potion for one minute? This perk would be in addition to those the cape already provides.

Question: Should the Hunter skillcape provide unlimited teleports to black and red chinchompa hunting areas, rather than the current maximum of 5 per day?

Question: When equipped, the Firemaking skillcape acts as a Lightsource. Should it also act as a Lightsource when it is in your inventory? This would also apply to the max cape.

Question: Should the Smithing skillcape provide the effect of the goldsmithing gauntlets in addition to its existing perks? This would also apply to the max cape.

Question: Should players with level 95+ Runecrafting be able to craft double law runes?

Question: Should players with level 99 Runecrafting be able to craft double death runes?

Question: Should pieces of the Rogue equipment earned from the Rogues’ Den minigame be awarded in a set order? This would prevent players receiving duplicate pieces before they have the complete set.

Question: Should an activity bar be added to Pest Control? Over the course of a game, the activity bar will slowly drain. Participating in the minigame, whether through combat or other methods, will increase your activity. If you do not keep your activity bar above a certain threshold, you will not receive rewards.

Question: If the activity bar is added to Pest Control, should the rewards for winning a round be increased to 3, 4 and 5 points for the easy, medium and hard boats respectively?

Question: Should the cost of halos from Castle Wars be reduced to 75 tickets? If you already own a halo, you would be able to claim back the difference in ticket cost from Lanthus.

Question: Should the cost of magic armour from Castle Wars be changed to 20, 40 and 30 tickets for the hat, top and legs respectively? If you already own any of these pieces, you would be able to claim back the difference in ticket cost from Lanthus.

Question: Should the cost of ranged armour from Castle Wars be changed to 40 and 30 tickets for the top and legs respectively? If you already own either of these pieces, you would be able to claim back the difference in ticket cost from Lanthus.

Question: Should the blue dragon area found within Taverley Dungeon be expanded with blue dragons which can only be killed when on Slayer assignment? 12 additional blue dragon spawns would be added.

Special thanks to Mod Jenesis for taking the time to write this blog.