A few weeks ago the artisan skill blew away all competition to win the latest PDC competition with a whopping 49% of the vote. The original concept, which was designed by Pix869, was very strong and we have worked with that design to flesh out the concept further.

Read the developer blog on the forums.

A few weeks ago the artisan skill blew away all competition to win the latest PDC competition with a whopping 49% of the vote. The original concept, which was designed by Pix869, was very strong and we have worked with that design to flesh out the concept further. 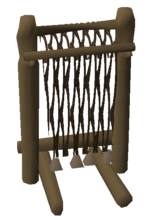 The purpose of the artisan skill is to prove to your artisan master that you are gifted in creating items using the skills you already have. In return, your artisan master will teach how to make even more complex items which will benefit all areas of your game play. You will be able to make idols which can be sacrificed to give you additional combat prowess, new equipment for pure skillers, the chance of cooking superior food, being able to make your own clothing and many more benefits.

Not only does this skill bring benefits in itself, but it also adds content to many other skills making them even more valuable.

An artisan is a master craftsman who is particularly adept at creating new items. In order to gain XP in the artisan skill you will need to show the various artisan masters your proficiency in making items.

For example an artisan master may ask you to create 100 vials and give you artisan XP equal to the crafting XP you got from creating the vials.

As you progress through the artisan skill your artisan master will teach you new methods of combining your skills so you can create brand new items.

What assignments will an artisan master give me?

Being an artisan is all about creating items, the assignments you get will relate to one of the following skills:

There will be a choice of artisan masters and they will give you tasks based on your levels of the related skills. Here is how they will break down.

When you working on one of your artisan task you may receive Mote of Inspiration. Motes of Inspiration are used to create some of the unique rewards that the artisan skill offers.

One of the skills your artisan master will teach you is the ability to create creature idols. Using your artisan skill and Motes of Inspiration you will be able to create idols of monsters which when burnt will give you extra damage against different types of monsters. Idols will be tradable. 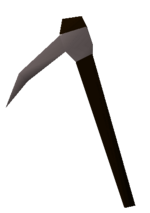 Another skill your artisan master can teach you is the skill to alter pickaxes and hatchets to make them easier to use. This will have the effect of removing the combat stats from the hatchet and pickaxe as well as the combat requirement to wield it. If you are using an altered pickaxe or hatchet, you will have a chance of getting Motes of Inspiration even though you won’t be on an assignment set by your artisan master.

Artisan masters will also teach you the ability of carving trinkets from ore. These trinkets can then be strung and worn around the neck to give you a chance to mine two ores instead of one for the next 28 rocks mined. 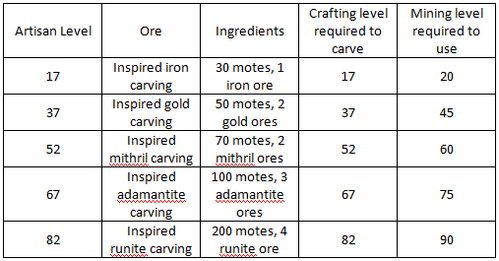 Being an artisan is not just about making new items, it is about making items really well. The greater your artisan level, the more chance you have of creating superior items when you do your everyday skilling,

Superior fletching – When fletching you may also be able to make superior arrows, these arrows will do slightly more damage than their normal counterpart as well as not disappear as often when being used.

Artisan masters bring many new skills to the residents of Geilinor, one such skill is making textiles which will give players the ability to create their own clothing.

There will be four textiles which you can make clothes from which will be needed to make the new clothing.

Using items on the loom will give players crafting XP.

The key to making a great skill is the feedback that you give. Without your thoughts and feedback Old School would not be the great game it is today. You all have the opportunity to make the artisan skill great, so please do tell us what you are thinking.