"Prove yourself a true champion. Kill the mighty dragon Elvarg of Crandor and earn the right to buy and wear the Rune Platebody" It has been 16 years to the day that the earliest Champion first heeded these words and set upon one of the most iconic challenges within RuneScape. In answering this call to arms the great adventurer would navigate Melzar's Maze, traverse the island of Crandor and inflict revenge upon Elvarg.

30 years prior to the fateful day a mighty adventurer awakened Elvarg from her slumber, Crandor was a thriving and very much alive island, with a great tradition of mages and adventurers. The history of Crandor is a bold one, enough so that many a Crandorian earned the right to be part of the Champions' Guild! The Crandor we know today is very different from that of the past and there are so many questions that remain unanswered - your chance to uncover the secrets of the past starts with Dragon Slayer II.

Dragon Slayer II will lead you on an adventure across the game, visiting locations new and old. Along the way, you will uncover new lore on the Dragons, as well as revealing the story of many a brave hero. Expect to complete challenging puzzles, traverse through undiscovered dungeons with multiple threats and face against some of the most fearsome foes we've ever introduced into the game! 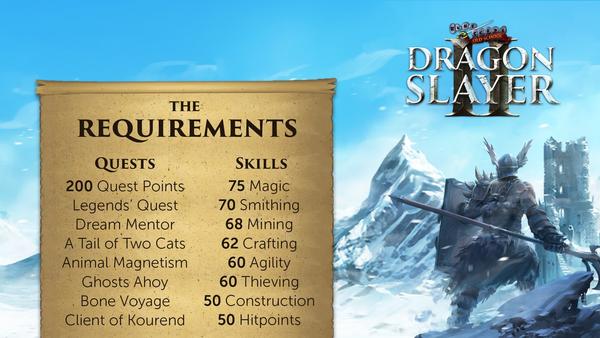 If you are experienced enough to take on the challenge, speak to Alec Kincade to start Dragon Slayer II. He can be found outside the Myths' Guild in the south of the Feldip Hills. The use of charter ships, spirit trees and walking through the feldip hills are all ways to reach the guild for those who haven’t done Corsair Curse. 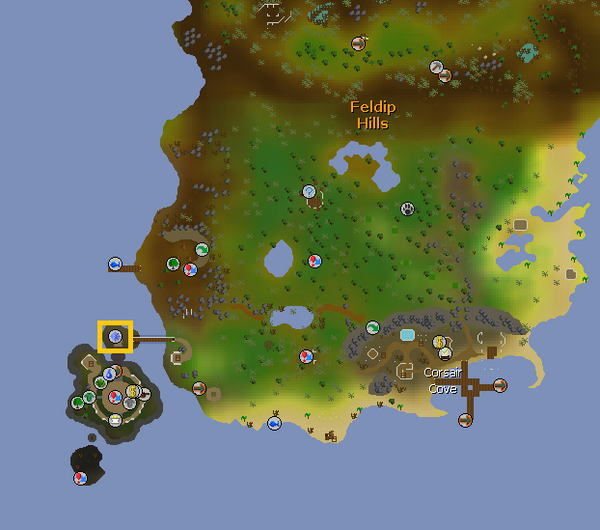 Throughout the quest you will face many challenges, of which some are combat related. In any instanced portion of the quest where a substantial amount of combat is required, there will be an item keeper relevant to the quest. This works identically to other grave systems like Grotesque guardians/Zulrah, and only one can be utilised at any time. This means that any other graves will be wiped on death. Please remember that standard instances will work as normal, meaning all items will be lost on death!

HCIM proceed with caution, this is a very dangerous quest and your character may perish - you have been warned!

This week is sure to be an exciting one, with many of our players streaming their attempts at completing the quest live! If you're unable to take part on day one but don't want to miss out on any of the action, then make sure to watch your favourite streamer here in the RuneScape Twitch Directory.

What's a Grandmaster quest without rewards? Well we don't have to worry about that, as Dragon Slayer II has plenty of them!

Once you've completed the quest you'll unlock access to:

The Full Myths' guild, which will contain:

The armoury store will sell the following items:

In the original Dev Blog, we stated the Dragon metal shard would cost 2,000,000 coins. As part of a balancing change regarding the drops of Adamant and Rune dragons, we have reduced this slightly.

Mythical Cape
The Mythical Cape is a new cape which will provide unlimited teleports to the Myths' Guild. It can be purchased and reclaimed from Jack, who is found within the Guild. 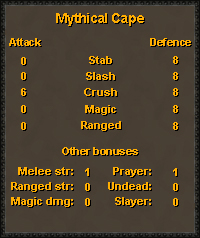 The Wrath Altar
Provided you have 95 and above Runecrafting, you'll be able to craft a new tradeable Rune, known as Wrath runes. These runes are crafted via the Wrath altar, located within the Myths' guild. The altar is guarded by various Dragons. You will need a Wrath talisman though, which is a tradeable drop obtained from Adamant Dragons, Rune Dragons or Vorkath.

Wrath runes and the Surge spells can be used without completing the quest.

Note: the max hits listed below do not include the use of any damage boosting gear. 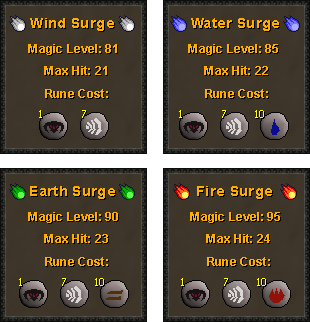 The Tome of Fire will work with Fire Surge.

Vorkath
Vorkath is a new high level solo boss whom is fought during Dragon Slayer II. Upon completion of the quest, you will be able to repeat the fight against Vorkath for a chance at some exclusive drops!

Dragonbone Necklace
Vorkath will rarely drop the Dragonbone necklace. The necklace is tradeable and requires 80 Prayer to equip. When worn, it will restore prayer points as bones are buried. The amount of prayer points restored will vary depending on the bone buried, with higher level bones giving more prayer points – this will use the same scaling as burying bones in the Kourend Catacombs.

This effect does not stack with the Kourend Catacombs prayer perk.
The bonecrusher effect will work with the necklace.
Equipping the necklace will reduce your remaining prayer points by 50% - this applies regardless of whether you are in combat or not. 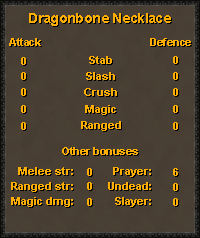 Completion of the quest is not required to equip the necklace. 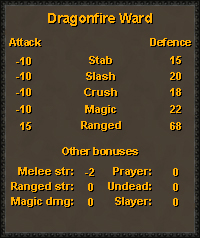 Vorkath’s Head & Ava’s Assembler
Vorkath will rarely drop his head. You can take this head along with 75 Mithril arrows and an Ava's accumulator to Ava in Draynor Manor to obtain Ava's assembler, the new best in slot ranged item for the cape slot. Ava's assembler requires 70 ranged to equip and can randomly gather mithril ranged items. It has an 80% chance of saving ammunition versus the 72% of the Accumulator - the other 20% would still break and be lost. 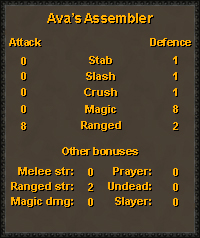 Both Vorkath's head and Ava's assembler are untradeable.

In addition to the assembler, Vorkath's head can be taken to the taxidermist in Canifis who will stuff it for use in a player-owned house. It can also be reanimated as a standard Ensouled Dragon via the Arceuus spellbook.

Adamant Dragons will have a chance of dropping a Dragon metal slice, which is used alongside a Dragon metal shard (purchased from the Myths' guild) and a Dragon sq shield to craft the Dragon kiteshield. Doing this requires 75 Smithing.

Rune Dragons will have a chance of dropping a Dragon metal lump, which is used alongside a Dragon metal shard (purchased from the Myths' guild) and a Dragon chainbody to craft the Dragon platebody. Doing this requires 90 Smithing. 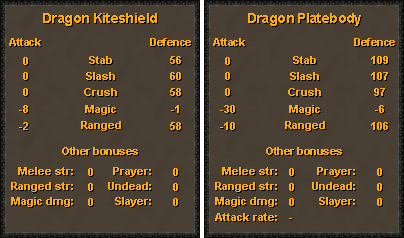 Both the Dragon kiteshield and Dragon platebody are tradeable and do not require completion of the quest to equip. 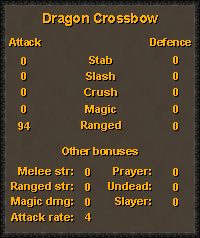 In addition to the stats above, the Dragon crossbow has a special attack known as "Annihilate". Annihilate will use 60% special attack energy to damage any enemy in a 3x3 area. The primary target of Annihilate will take 20% extra damage, both in PvP and PvM. All other targets will take 20% less damage, both in PvP and PvM. If used in a single-way area, the attack will still work but only hit one target with 20% extra damage.

The crossbow is tradeable, requiring 64 Ranged to equip. Completion of the quest is not required to equip the crossbow. 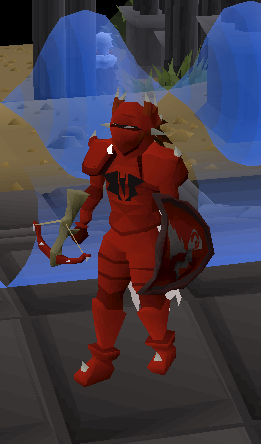 Superior Dragon Bones
Obtained via killing Vorkath, Adamant, or Rune Dragons, these bones are tradeable and give 150 Prayer xp when buried, making them the best bones in the game. However, they require a Prayer level of 70 to use. Superior dragon bones can also be crushed with a Pestle and Mortar to create Crushed dragon bones, which are a secondary ingredient in Superior antifire potions.

Use of the bones does not require completion of the quest.

Dragon Bolts
Dragon bolts are dropped via Vorkath, Adamant and Rune Dragons. They drop unfinished, and require 84 fletching to add feathers to and complete them. Doing so will grant you with 12xp per finished bolt.

It is possible to add all current bolt tips (minus Amethyst) to the finished bolts. They have the same effects as the current tipped bolts, the only difference being that they have the same Ranged Strength as Dragon Bolts. 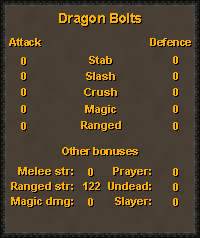 Dragon bolts can be fired from the Dragon Crossbow, Dragon hunter crossbow and Armadyl crossbow. Dragon bolts (unf) and Dragon bolts are tradeable. Use of these bolts in any form will not require completion of the quest.

Special thanks to Mod Ian & Seb Boulton from the audio team, and our own Mod Ash, for the fantastic music tracks included in this week's update! If you are taking on Dragon Slayer II, be sure to do so with the music enabled!

In our last news post, we announced two competitions for Dragon Slayer II. We've had some absolutely fantastic submissions but there can only be one winner for each.

Although they didn't win, we do have some honourable mentions for the Video Summary Competition. Their work was fantastic and definitely deserves a mention! All of the below links will provide you access to their submitted videos via YouTube. 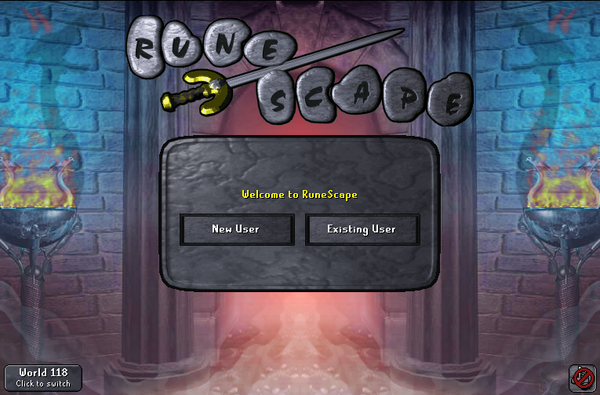 Not a member yet? You do need to be a member to take on Dragon Slayer II! Grab great value membership today with the Old School Premier Club, available for a limited time only.