This week we're releasing the first round of game integrity changes. These are a series of unpolled updates that do not replace any measures we already have in place, but rather look at what we, as a development team, can do to specific pieces of content to improve the Old School experience for genuine players. You can expect lots more of these changes to come with the next few weekly game updates.
Integrity Changes

Magic Training Arena
Initially we proposed adding a Magic requirement of 68 to pick up Dragonstones in the Enchanting Chamber. This wasn't a popular suggestion as most bots had 68 Magic, and so would be unaffected. We then proposed making the room instanced with a maximum capacity of five. Whilst you'd encounter less bots, it still didn't do enough to tackle the underlying issue which is: the nature of the Enchantment Chamber meant that you were best off hopping worlds for maximum points, meaning that you'd be competing with bots across multiple worlds.

With this in mind we have opted to change the points rewarded for enchanting shapes. These would now scale per enchant type, similar to Dragonstones.

Additionally, the bonus points given for enchanting the correct shape has been increased from one point to two points.

A second floor, accessible by ladder, has been added. Accessing this floor requires 500 Total level and a set of Zamorak robes (Members are also able to equip the Zamorak Vestment top and bottom). Telegrabbing the Wine of Zamorak on this second floor will not result in the Monk of Zamorak becoming aggressive (though picking it up by hand will). 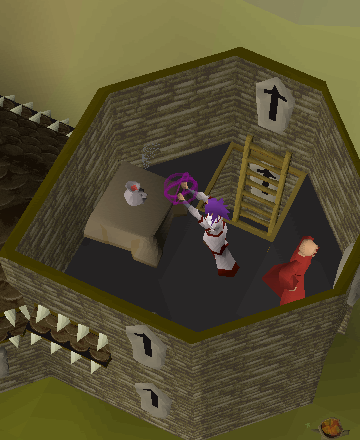 Zaff's Staves
To make it more difficult for bots to purchase all of Zaff's stock, we proposed adding at least partial completion of What Lies Below as a requirement for purchasing Battlestaffs from Zaff. This is not to be confused with the Diary reward, and other Staffs in his store will still remain accessible without meeting this requirement.

This was received positively but there were concerns from pures, as What Lies Below yields a 2k Defence XP reward.

Partial completion of What Lies Below will now unlock access to the Battlestaffs. This is after the battle in the library, but before you speak to Rat Burgiss to complete the quest. We have attempted to make it clear at this stage of the quest that you can now purchase battlestaves from Zaff and that going on will reward defence experience, so players don't run into any accidental defence experience gain.

This change will not impact the Deadman Tournament, but WILL be live from the start of the Deadman Autumn Season

Change to Box Traps
To aid legitimate players when competing against bots, initially we pitched the idea of having completion of Eagles' Peak required to be able to use Box traps. This was received very positively, with no notable concerning feedback.

In order to use box traps, players will now need to have progressed though the Eagle's Peak quest until the point where they have been shown how to catch the ferret. We felt this was the best option as it's possible for you to release the ferret after it has been captured in the quest (which doesn't require a Box trap), and to catch a new one you'd need to use a Box trap.

We've also added a non-combat alternative for completion of Eagles' Peak. Previously you had to kill the kebbit, now you're able to "Threaten" the kebbit, causing it to retreat.

This change will not impact the Deadman Tournament, but WILL be live from the start of the Deadman Autumn Season

Players may now store 100 of each log type used in balloon travel into a storage crate conveniently placed beside the balloons. There is a toggle between using logs from the storage crate or the inventory which can be accessed by right-clicking any of the storage crates. 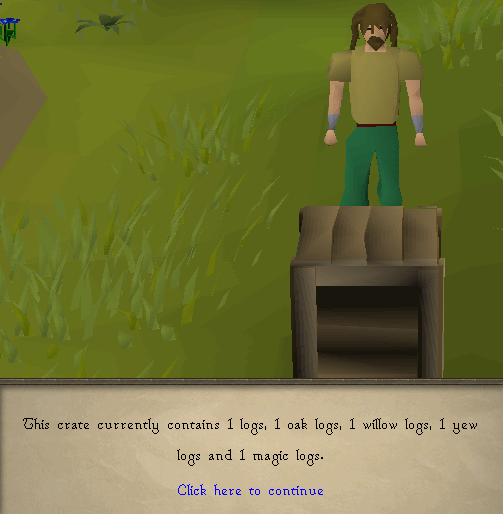 Back in April, if you attempted to Shove a player who'd recently been shoved, or an NPC that wasn't shovable, the special attack would refuse to act, but your combat would be stalled as though you had done an attack. In May, we released a small patch so that your combat would no longer be stalled by the failed special attack. This was okay in PvM, but players doing PvP didn't like it because they wanted their combat to be stalled so they wouldn't receive unexpected combat XP. We have therefore reverted that change in PvP only.

The farmer's straw hat no longer remains in place when teleporting via the Ardougne cloak or Desert amulet.

The position of the Fremennik boots in the inventory have been changed so they are more consistent between tiers.

Beards will no longer render over the Armadyl helmet on male chatheads.

The male construction cape (t) now has the correct colour on the shoulderpads.

A graphical issue causing Third-age range legs to stretch when the Ale of the gods is equipped has been resolved.

We've corrected some spelling errors in the tooltips for various music tracks.

The current active rota is Period A'. For the next two weeks, until Thursday 12th of July. More information can be found on the dedicated PvP World Rota page, which will be updated every two weeks.

In Case You Missed It

If you haven't seen it already, make sure you take a look at our most recent poll focused blog covering areas such as the Revenant Cave reward rework, Content Changes and some detail on an alternate version of the Theatre of Blood.

Don't forget, this Saturday on the 30th June from 7:30pm BST, we'll be hosting the Deadman Summer Finals live with the assistance of ESL. Join us for an intense few hours with 2,000 players battling it out for a shot at the $32,000 prize pool! You do not want to miss it!