This week we've got a monster update for you including the summer event and a host of the new features you voted for in the recent poll.

Getting Back to Nature

This time of year is troubling for druids. There are all sorts of evil spirits trying to do their worst to harm nature, so the druids in Taverley are doing their best to protect it. Unfortunately, they are having a few problems.

Head over to Kaqemeex in Taverley to take part in the Midsummer Event. Over the next two weeks the Taverley druids are going to be needing a helping hand, so make sure you check back every day to take on the daily challenges. If you show some support, Kaqemeex and his friends may want to repay the favour and reward you. If you have ever had the urge to hug a tree, this is your chance to really show them some love and save them.

The wilderness bosses are now a lot more rewarding. They have been given a significant buff to their drop tables, as well as some brand new loots; The Treasonous ring, Tyrannical Ring and Ring of the Gods. If you are yet to try taking on Venenatis, Callisto or Vetion, gear up and give it a go!

The Rangers tunic and Holy sandals are now available as a rewards from elite and medium clue scrolls respectively. 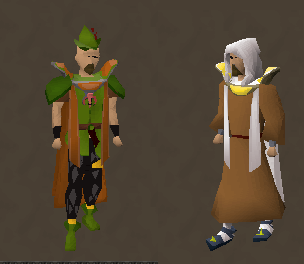 The Kalphite Queen has undergone some royal surgery and now offers a much more rewarding range of drops so pop down to the hive and pay her a visit.

A few in-game objects that you may have been struggling to click have been given a bit of a boost to the area in which you can click on them. POH amulet of glory, abyssal rifts, rope swings and wilderness levers should now be easier to click.

Your duel partner's chat and any game messages relating to the stake setup, are now output to the trade tab while the challenge interfaces are open. If either player closes the first or second screens the chat stops appearing on the trade tab.

A few small changes, based on feedback, are being made to Clan Wars with this update.

An extra right-click option has been added to the public chat button that allows you to pause your autochat and start it up again without having to re-type the message.

Autochat is now triggered 3 seconds after you last spoke instead of every 3 seconds to stop you hitting the anti-spam filter so quickly.

Join us for our usual developer Q&A later today at 5pm BST on Twitch TV.

To discuss this update, join us on our forums.