Earlier today we did a livestream where we discussed the long term role of F2P in Old School Runescape. You can watch this stream below.

The goal of every online game is to ensure the game stays healthy for as long as possible. This includes making it financially stable so we are able to grow the team and deliver more and bigger updates for you. It also includes keeping the active players stable so the community continues to be diverse and busy allowing for better PvP, more competitive trading and always being able to play group minigames when you want.

Since May last year we have been running F2P trials with the intention of creating a F2P service that is best for the long term health of Old School. The end result of these trials is that if we introduce Membership Bonds we can introduce a full and permanent F2P service.

Membership Bonds will only be able to be used on membership. Squeal of Fortune, Solomons Store, Treasure Hunter, Runecoins or any other sort of micro-transaction will not come to Old School unless you vote for it in a poll. You are in control of Old School. In fact, we believe this so much that we want you to vote on whether a full and permanent F2P with Membership Bonds should be introduced.

One thing you all need to be aware of is that a full and permanent F2P service cannot be introduced without Membership Bonds. Let us explain why.

Below is a graph that shows the projected membership for the next 5 years for three different scenarios; staying as we currently are, introducing F2P on its own and introducing F2P with Membership Bonds. 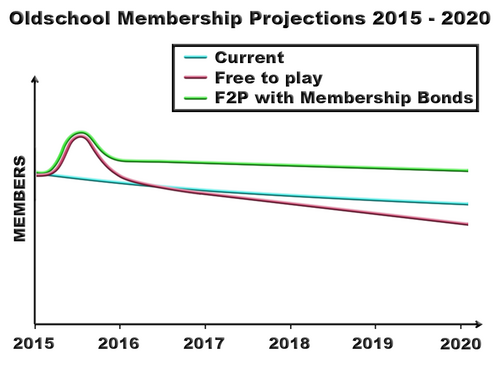 What will happen if we do nothing?

We looked at the membership trends since launch and utilised the longer history from RS3 to model what we think Old School will do if we do neither F2P scenario. As there is no attrition from a F2P service and a moderate gain through the F2P trials we see a slight decline over the next 5 years.

What will happen with just F2P?

We took the uplift we have seen from the F2P trials and used information from the initial launch of Old School to estimate the sudden increase in members when F2P is launched and the length of time these accounts will be retained. We then looked at the increase in players we saw lapsing out during the F2P trials and factored that in too. Players lapsing out will be a continuous effect on the membership line while the gain from F2P will be concentrated in the early period.

As you can see, although a F2P service on its own will bring some short term success, in the in the long term it is quite damaging.

What will happen with F2P and Membership Bonds?

Adding Membership Bonds is not about getting more members, but retaining old ones more effectively. As you can see from the graph we still see the initial increase from a full and permanent F2P service and using information from how bonds have effected RS3 we have been able model the impact on those accounts that lapse out for F2P. We expect a full and permanent F2P service with Membership Bonds to allow us to have more players in 5 years time than we have today and that would be a wonderful achievement for us and the community.

We already know that 25% of you have used bonds by utilising the swapping clans out there to move money between Old School and RS3, so bonds are already used in Old School. We have also seen that bonds have reduced real world trading and botting in RS3 which in turn has seen a decrease in gold being generated by bots which is great for the economy.

We expect to see the same impact in Old School. We will see a reduction in bots and RWT; and the gold they generated which is a huge benefit for skillers and the economy. In turn we will see fewer spammers and those gold swapping clans will cease to exist.

Of course, bonds wont solve the bot problem on their own, and there will be more bots because of F2P so we need to be able to combat those too. During the F2P trials we have seen an increasing in mining bots, woodcutting bots, combat bots and spamming bots. Here are some things we can do to combat these.

What you need to do

In conclusion, it is really important that you tell us what you think about introducing a full and permanent F2P service alongside Membership Bonds. Everything tells us that this is the best option to allow Old School to flourish further in the future and allow us to make it the game that you truly want it to be.

Discuss this on the forums.