This week we've got a rework for the duel arena that will make everything that happens at the arena safer and quite a bit faster. This includes a rework of both the challenge screens and the ability to save and load duel rule presets!

The duel arena is a brilliant place to risk some cash and have some fun. To make the duel arena both safer and a more enjoyable place, we have reworked the challenge screens to make the process of setting up a duel quicker, easier and more scam-proof.

It is now possible to save and load a chosen set of rules for duels. When on the challenge screen, pick the rules you would like to create a preset for and click the 'Save as preset' option. You will then be able to load these rules at the click of a button using the 'Load preset' option. 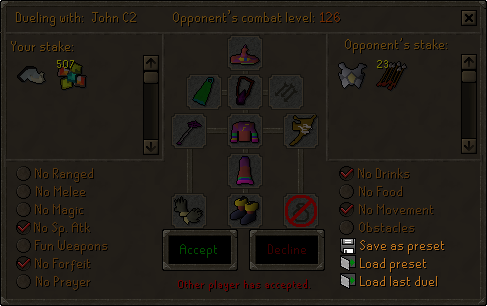 It is also possible to choose to use the same rules as your previous duel. Simply click the 'Load last duel' option.

Scamming has, unfortunately, been a problem at the duel arena for as long as the duel arena has existed. With the duel arena revamp we have added a number of anti-scamming measures that make some of the most common scams at the arena impossible. 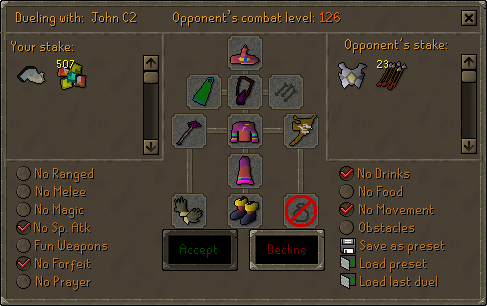 When a change is made to the rules the 'Accept' button cannot be clicked for a few seconds. This means that it is impossible to quickly change the rules and trick your opponent. This is also triggered by changes to the items being staked.

One other large change is the redesign of the second screen.

Changes to the second screen

The second screen that appears when starting a duel has been given a makeover. It now provides much more information about what the duel you are potentially entering will entail. You can see exactly what rules are set including specifics about which equipment slots are enabled. 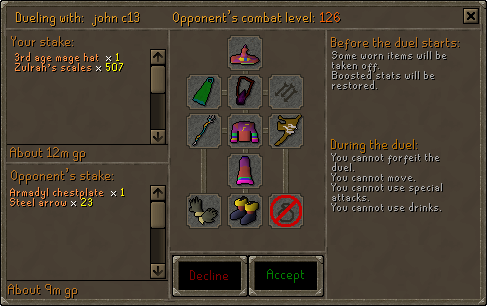 Perdu, the dwarf found upstairs in Edgeville general store, will now sell you back any achievement diary gear that you may have lost. 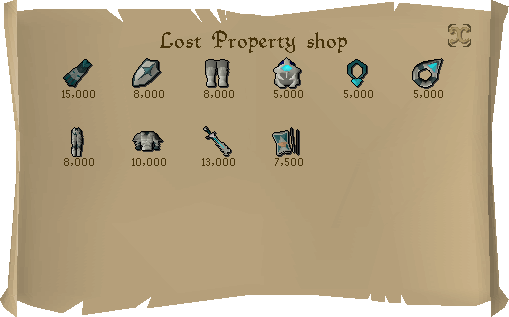