In our Message to the Community post we talked updating old content. While we have put considerable work into updating existing content already this year (notably rebalancing parts of Chambers of Xeric and enacting dozens of player-requested changes to existing content via the February polls), we understand there are some parts of the game that feel neglected, and that players rarely interact with. There has been a demand for us to give these parts more attention and here is our plan to do so!

Until now, we've commonly relied on channels such as social media and online forums to have discussions about the changes that should be made to Old School, including older content changes. While we want to keep those discussions going long term, we'll also be conducting thorough research using player surveys and opinion polls. From this we'll develop a clearer idea of what our priorities should be. The idea is to expand our reach beyond the portion of our community who are active on social media and work to address the needs of our wider community. This is the approach we'd like to adopt for all changes to the game from now on.

This is the beginning of a long and exciting journey to improve all the existing content you feel is due some attention. From here onwards, we'll be looking to continually improve aspects of the game and weave the smaller updates and changes between them. We know from previous discussions with the community what many of the suggestions and pieces of content are and your calls have not been ignored. But the research we're going to carry out will inform us what content is the most important and which content we should turn our focus on first as well as the specific changes needed.

Regarding the PvP scene: there are many changes that have been suggested, and we know there's plenty of work to be done to get it to the place we all want it to be. PvP needs a separate discussion - which has already begun - the focuses on on our overall approach to implementing these changes. This involves creating a new process for discussing PvP with the players who PvP matters to most which will allow us to make better decisions about PvP.

So! Let us know what you want us to revisit and how you want us to do it. What do you think is most important? You can expect these questions to be asked in upcoming surveys and polls in addition to the usual channels. We're aware there are several parts of the game that could do with more love and if we could, we'd address them all at once. However this is a great place to start and will guide our future efforts to improve the game. The community has always been at the core of Old School and making sure the older parts of the game are maintained to a high standard while new things are introduced is key to keeping the game we love alive.

Hopefully you'll have seen or heard about our recent announcement to proceed with hiding poll results. As a result of that decision, this will be the first ever poll in which poll results are hidden. Pending feedback to this blog, we'll make any necessary changes and poll the suggestions below from Friday April 12th until Tuesday April 16th. 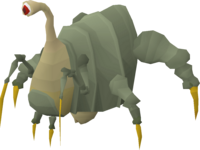 Minigames are one of the key areas of Old School we'd love to rework and we look forward to seeing some big designs for the ones that need it! In the meantime, we'd like to start by offering the following:

Pest Control waits quite a long time for a max size party to gather, before giving up and launching a smaller party. We can offer to reduce this period, so that smaller parties on quiet worlds can launch faster.

Currently, if you log out while you're in the Mage Training Arena without depositing the coins you earn there, they are removed from your inventory. We'd like to change this to be less frustrating for players.

We'd like to offer the following improvements to Farming and the Tool Leprechauns:

In February we made a change that allows weapons of the same category to remember the attack style they've been set to. To make it clear which weapons belong to which category, we'd like to add this to the combat tab:

Currently, Perdu's location in a dangerous area alongside his requirement for gold to be in the player's inventory makes him a hotspot for luring. To fix this issue and improve his functionality, we'd like to offer the following:

Plank Make is a Lunar spell that requires 84 Magic to cast. Each cast converts one Log to its plank equivalent, making it a click-intensive process. To remedy this, we'd like to add automation to this, similar to what we did with enchanting jewellery and many other processes. This would be made slower than manually casting the spell to avoid affecting XP rates and to compensate for reducing the click intensity.

In the last update of March, we introduced the Seed Vault to the Farming Guild. This has allowed players to free up bank space and prepare their farm runs efficiently by storing all the non-quest seeds in Old School. In response, you've given several ideas to improve its functionality. We talked the suggestions through and as a result would like to poll the following:

A search option has been a popular request that would allow players to find seeds they're looking for quickly.

Some players have requested that Saplings be added to the vault so that they don't have to open the bank in addition to prepping their farm runs from the Seed Vault.

A placeholder system for the seed vault would serve the same purpose that it does in the bank interface - allowing you to withdraw all of any one item (seed in this case) without disrupting the order. This has been highly requested.

While the Seed Vault interface is adequately sizes for users in fixed mode, those who play in resizable have said in feedback that it should be larger.

That's all the changes for this poll blog. Let us know what you think about them in the usual channels listed down below. This is the beginning of an exciting journey back through all the content in Old School that could do with a revisit. We look forward to delivering all the redesigns, revamps and upgrades to existing content you've been asking for!