Raids Improvements
Over the past week we've continued reading your feedback on the Chambers of Xeric. This week's update includes a number of changes to address what you have had to say.

Specific rooms within the Raid now have Storage chests to share items between party members.

These storage chests are built using mallignum planks which can be obtained by killing monsters within Raids. They require level 30, 60 or 90 Construction to build the small, medium and large variants. 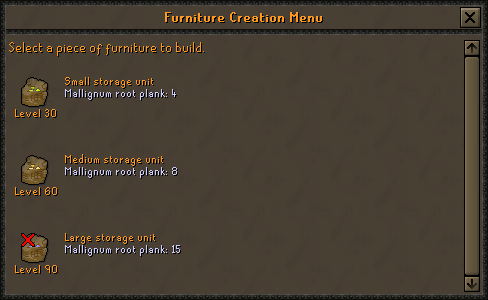 It is possible to upgrade the small and medium chests to a higher tier.

100 points are awarded to the builder of the chest, as well as 10 points to the players who obtained the planks used.

Ironmen are able to deposit items into storage chests but are not able to withdraw.

A second, much more common, prayer scroll used to unlock the Preserve prayer can now be obtained from Raids.

It is no longer possible to unlock Preserve using existing prayer scrolls.

Ancient tablets are a common, untradeable reward from Raids. When using on a Xeric's talisman, a Chambers of Xeric Teleport is permanently unlocked.

Once you've unlocked the Chambers of Xeric teleport using the Ancient tablet, you'll no longer receive them as a reward from Raids.

A second herb patch has been added to skilling rooms within Raids. This will help speed up the process of growing a large number of herbs.

Previously, the Kodai Wand was simply received as a drop from Raids. With today's update, this is no longer the case.

Prior to today's update, if your prayer was drained to 0 by smite at the same time you died, your prayers would remain active and protect item would still take effect.

This is no longer the case. Prayers will now deactivate the moment your prayer points are smited to 0.

The boss and slayer logs have been given an overhaul to make them more useful and a little nicer to look at. 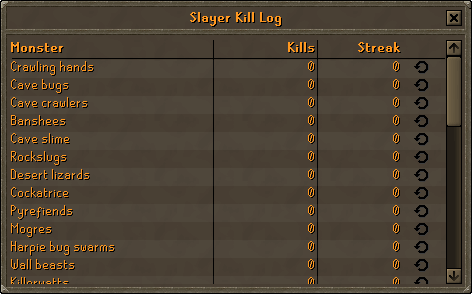 A streak count has also been added to help you track your individual kill streak, which can be manually reset using the button on the right.

In addition to this, the boss and slayer kill count can now track beyond 65535!

The Chambers of Xeric are now also being tracked in the boss log.