We have been listening to your feedback on things in the game that need to be improved to help make the player experience better. We would like to bring some of those small improvements to you in the coming weeks. Below is a list of suggested changes for in-game content that will fall under the "Integrity Changes", "To Be Polled", and "To Be Discussed" sections. Pending feedback to this blog, we'll make any necessary changes and poll the suggestions from the "To Be Polled" section from Friday July 12th until Monday July 15th.

This section displays changes we plan to make without polling. These are classified as integrity changes as they combat rule-breaking or change elements of gameplay that are considered unfair or counterproductive to the game's long-term health.

Bulwark Rework
When the Bulwark was released it was looking to fill a niche in PvM to enhance a tanker's ability to help the team when group bossing. As time has gone on, it's clear that the shield has very few limited uses outside of aiding in wilderness protection. This isn't a problem in itself however, in its current format, it gives the player high invulnerability when combined with certain equipment/protection prayers. We would like to reduce its Defence bonuses by -10 in Stab, Slash, Crush, Magic, and Ranged.

Avernic Defender Repair Cost and Death Drop
The Avernic Defender currently drops 1M on PvP death but it also costs 1M to repair at Perdu. Typically, broken objects act as a gold sink in PvP, however, this one does not. We plan to increase the repair cost to 1.25M GP so that there's a cash sink but no decrease in value to the PKer.

Snare and Entangle on F2P Worlds
After adding Tele block to F2P, the appetite to try out F2P PKing was apparent but lacked some key components such as preventing players from moving for longer durations. As a result, we plan to add Snare and Entangle to F2P to facilitate more effective F2P PKing.

This section displays changes we plan to make if it passes a poll. These are changes that were suggested from you that involve improving existing in-game content. Please give us feedback on these changes before we go to poll so we can make appropriate changes and update this blog accordingly.

Interfaces
In April we released a new Goldcrafting interface that functions with left-click buttons like the bank. Following the update, there was a high demand from you that we should update our Smithing and Silvercrafting interfaces as well. 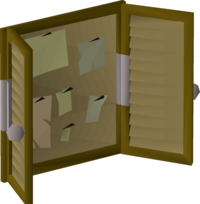 Player Owned House Advertisement Board
Currently the meta for advertising an open player owned house is to have an account stand outside the house portal and spam the homeowner's RSN as much as possible so players can see it, type it into their chat box, and ultimately enter the house. This spam is often facilitated by bots or autotypers but also comes with issues such as being able to see that homeowner's name long enough to type it correctly and enter. We would like to propose a Player Owned House Advertisement Board. This will allow a homeowner to set their house to be advertised on a board that will sit outside every POH portal. This board will display the name of the homeowner, their Construction level, and a choice of what they are sharing the house for (i.e a gilded altar, lectern, portal nexus). When a player looks at the board, they can then click the homeowner's name and it will teleport them into the player's house. If a house is closed, the entry is removed from the board.

Marble Lectern
Players can choose to have a single lectern in their house per Study room. This results in players having to either choose between the two best lecterns or making two Study rooms to accommodate the different tablets players can make. We would like to introduce a new Marble Lectern that combines the ability to make tablets from both the Mahogany Eagle and Mahogany Demon Lecterns. This will require 77 Construction, 1 Marble Block, 1 Magic Stone, and 1 Gold Leaf to create.

Kill/Death Ratios
We recently updated the K/D Ratio to be included on HUD in PvP worlds. Since then, there's been a demand to have separate K/D ratios for PvP and BH Worlds rather than using the same one for all. due to them being combined previously and therefore not tracking which world the kill or death occurred on, if we were to make separate K/D ratios, they will have to start at 0. 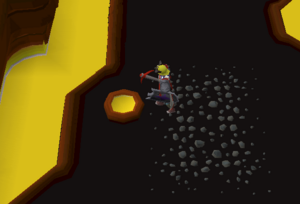 Volcanic Mine
In order to start a game, players must left click the Volcanic Mine and go through some dialogue to exchange numulites to enter. We propose an option to right click quick start on the entrance which will take the 30 numulite fee out of your inventory. 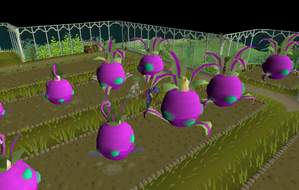 In addition to the left click plant watering on Tithe Farm we would like to update Bologa's blessing to be 1 Tithe Point for 10 blessings rather than 1 Tithe point per blessing. This blessing allows players to pick Zamorak's grapes instead of grapes from the Vinery. It consumes one blessing per grape picked.

Web Slashing
Only specific types of weapons are allowed to slash webs. We propose letting any weapon with a slash bonus slash webs, with a success chance dependent on the weapon's slash bonus. The Wilderness swords currently give a guaranteed web slashing chance in the Wilderness and will be kept the same.

Locator Orbs
After completing Dragon Slayer II, players can only have one locator orb at a time. Since the orbs are useful for draining health, similar to Dwarven rock cakes, it can be a pain to have to retrieve another one upon death. We propose allowing players to retrieve multiple copies of the locator orb by speaking to Ana. 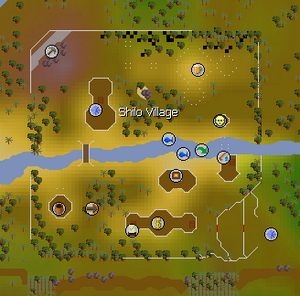 Shilo Village Shortcut
Players can directly teleport to Duradel with Karamja gloves 4 thus making the unlock to the Shilo Village river shortcut seem rather useless. We propose moving the shortcut unlock from the Elite Karamja Diary Reward to the Medium Reward instead.

Ecumenical Keys
The drop rate of ecumenical keys is 1/60. However, once you possess a key, the drop rate decreases by 10 to 1/70 and 1/80 for your second and third keys. You are limited to a maximum of three keys; if you get more than that, you will be unable to pick up anymore until they are destroyed or used. However, upon completion of the Medium or Hard Wilderness Diary you can hold up to 4 or 5 keys at a time. We can remove the drop rate restrictions to have a flat 1/60 rate regardless of the keys a player currently holds.

In addition to the drop chance change, it was flagged that Aviansies do not drop ecumenical keys. The reason for that in 2014 is out of date now that banknoted adamant bars are dropped elsewhere. Aviansies are no easier to fight than most other creatures in the Wilderness GWD and for consistency reasons we would like to add ecumenical keys to their drop table.

Clue Casket Locks
Since caskets are now stackable and clue scrolls have had a graphical change to be colour coded based on the various tiers, we can update the clue reward casket locks to match the colours of the clue scroll tiers so it's easier to determine which casket is which tier.

This section displays changes we are investigating and want your feedback on before we implement or poll any of them. Please provide us with as much feedback as possible to ensure we give you all the updates you want.

Special Attack Teleport Restriction in PvP
In November 2018, a previous PVP cabal suggested we make a change that prevented players from teleporting for 3 seconds after using a Special Attack whilst in the Wilderness or in a PvP/BH world. Since the change, it was proven unpopular with PvPers and is often requested we revert it. We can revert this change however, we wanted to offer this as a discussion point first, to ensure we are reaching out to as many of you as possible. If this is something you would not like removed, please provide us feedback.

Imbued God Capes and Other Untradeables
One of the most commonly questioned subjects as a result of the State of PvP blog is that Imbued God Capes are always lost on death but only in PvP. When originally polled, the capes were to be lost no matter what, however due to the way the death system works, it is overridden. We would like to discuss what we should do moving forward. This could be adding them to Perdu so they're usable in pre 20 Wilderness, or making them lost in PvM situations too so that it's fair for PvM and PvP alike (and matches what was polled). We would like to make the change to match what was polled however we want to ensure this is what the players want before proceeding.

While on the topic of fairness between PvP and PvM, a discussion arose about how PvPers are expected to pay to repair their untradeables for losing them below 20 wilderness, however in PvM they can't break and can just be reclaimed or are kept on death. The idea has been batted around the team and ultimately, we wanted to open up the discussion to you all on the finer details. There is little risk when PvMing outside an instance anymore so we would like to have a discussion on whether the items Perdu can repair, should be required to be repaired regardless of location (but still lost over 20 wilderness). While we can make this proposed change, we want to open up discussions on how you would expect to get your items repaired should the change go through. We can do one of the following options: require players to go to the current Perdu locations, map Perdu down at more locations such as TOB and COX, or we can offer the ability to go to a banker and have them repair your items for you (similar to Perdu).

Magical Defence Calculations in PvP
We have the ability to make Magical defence be calculated differently for PvP and PvM. Currently it's 70% from your Magical stat and 30% from your Defence stat. Similar to what we did in Seasonal Deadman Mode, we could change these percentages to 50% for both in PvP only while leaving PvM alone. Please give us your thoughts and feedback on this proposal via the channels listed at the bottom of this newspost.

That's all the proposed changes for this blog. Let us know what you think about them in the usual channels listed down below. Please ensure you expand the various sections of this blog to read all of the proposed changes including poll questions. Pending feedback, we look to poll the "To Be Polled" changes from Friday July 12th until Monday July 15th.