Ian and Mod Ash are working away on Resizable Mode. The gameframe elements are coming on well, with option buttons to control the chatbox transparency and the layout of the stone buttons: 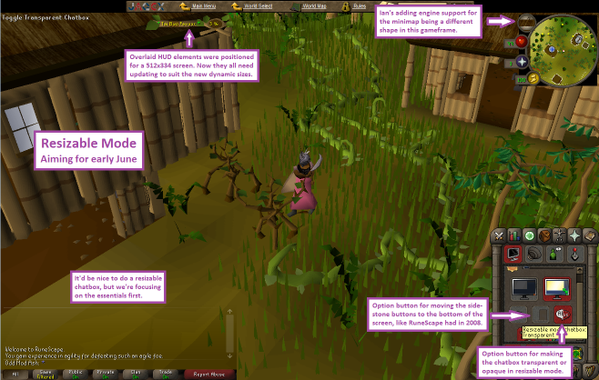 ... but there's a lot of work still to do, reviewing around 540 interfaces to make them handle a resizable screen. We hope to have this ready for launch at the start of June. Mod Maz is working on our Duel Arena, as a break from her usual RS3 work, adding in a few essential improvements such as preventing players from changing the setup options without their opponents noticing, and showing more useful information on the confirmation screen. While she's deep in the Duel Arena code, she's happy to build in a few extra features if you vote for them in Content poll #33.

Content poll #33 is now open, offering a range of features from quick world hopping to Farming improvements. Be sure to check out the developer blog for all the info then head to a poll booth to vote!

Join us later today for the Old School developer Q&A on the RuneScape Twitch channel. We'll be answering the most pressing questions from the Old School community live at 5pm BST.