This week in Old School we have, as always, got a number of quality of life changes as well as a rework of the way slayer tasks are assigned. Let's get into the details.

We have reworked the slayer assignment tables to remove bad tasks, unnecessary requirements and have altered the weighting of certain assignments.

The rewrite of the assignment system allows us to add tasks in a way that doesn't have a large impact on the rate at which all other assignments are given. With the previous system, some tasks ended up being so rare that you would almost never see them.

We have also made some direct changes to assignment tables based on feedback from the community:

We have increased the number of spawns for several popular monsters.

The blue dragons and black demons found in Taverly[sic] dungeon now have extended areas with some extra spawns.

The red dragons and baby red dragons found in the Brimhaven dungeon have also had their area expanded and a few new spawns added.

In addition to adding new spawns for existing monsters, we have added a new type of monster in Brimhaven dungeon: baby green dragons. They can be found east of the fire giants. It is possible to quickly access the baby green dragons by climbing up a vine found to the north of the cave, right by the entrance. This vine requires 87 Agility to climb.

These baby dragons will allow slayers that receive a green dragon task to trade a bit of experience and profit for extra safety.

When selling items to a shop you now have the option to sell 50 at a time. This should help make the process of selling items to stores a whole lot smoother if you are trying to sell large quantities. 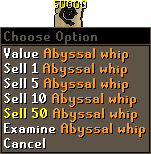 It should be noted that a "Buy 50" option has not been added alongside this.

A shortcut into the Kharazi jungle which requires 79 Agility and access to the Legends' Guild to use has been added just east of the entrance to Shilo Village.

Teleport outside of your player owned house

It is now possible to toggle whether teleporting to your house will place you inside your house or by the house portal. This option can be found in your house options in the settings tab. 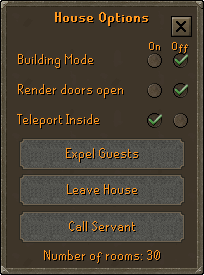