From Old School RuneScape Wiki
(Redirected from Compass)
Jump to navigation Jump to search
The RuneScape Wiki also has an article on: rsw:Minimap 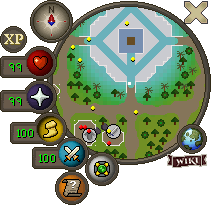 The Minimap (also called mini-map in RuneScape documentation) is the area of the game interface in the upper-right of the screen. It shows a bird's eye view of the player's surrounding area, with the player at the centre.

The minimap appears as an approximately circular area with a 19 square-length radius (see below). White lines represent walls, fences, etc., although a red marker indicates a door or other penetrable features. Coloured dots act as markers to identify nearby items, players, monsters and NPCs (see below). Certain buildings and features (such as water sources) are marked by icons. Quest start points are also shown on the minimap.

The minimap does not function in areas such as the Barrows and Puro-Puro.

Players can navigate by clicking directly on the minimap itself. A red flag will appear to show that the player is moving to the area clicked on; however, if one tries to enter a location that is inaccessible (due to a door being closed, or some other obstruction) then either nothing will happen, or the game will move your red flag to the nearest point that you can travel to.

There are no markers for followers.

The scale of the Minimap is equal to that of the official Java-based World Map at 100% zoom, or exactly 16 pixel-lengths2 = 1 square. Alternatively, the conversion 4 pixel-lengths = 1 square-length may be used. When perfectly aligned along the horizontal and vertical axes, the Minimap displays a circular area with a radius of exactly 19 square-lengths.

The Old School RuneScape minimap includes four icons, called data orbs, representing from top to bottom: Hitpoints, Prayer, Run energy, and Special attack energy. To the left of each icon is a number representing the player's remaining points in that category. In addition to these data orbs is a compass, and the XP drops button. The compass indicates north, and rotates relative to the orientation of the game world, also called the camera. The compass may be clicked to reset the camera to a northerly orientation. The XP drops button, when clicked, provides a small information box to the left of the minimap, showing total experience, or XP, earned. The XP drops button may be configured by right-clicking the button and selecting "Setup", allowing for configuration of many aspects of the XP information box, including position, size, setting trackers and goals for individual skills, etc.

The Prayer orb shows the player's remaining Prayer points. As with the Hitpoints icon, the background will drain and the numbers will change colour as the player's Prayer is reduced. Clicking this orb toggles the player's Quick-prayers (which are set by right-clicking the Prayer icon and choosing "Setup Quick-prayers"). If the player already has prayers on, turning Quick-prayers on will turn them off and turn the quick prayers. If a player toggles the icon again, the prayers turn off. If a player turns on prayers without toggling the prayer icon, they can turn the prayers off completely by toggling the icon two times quickly. This can be a good strategy to reduce prayer point usage.

The Energy orb shows the player's remaining run energy. It can be clicked on to toggle running on or off. The background will also drain as energy is reduced.

In PvP, special attacks can only be activated from the Combat options tab.

The world map shows the map of Gielinor, including underground areas.

The interface that opens when players tap the Store orb.

This icon will appear below the minimap in the right corner of the screen if the player is in a multicombat area.

The current attack style will be displayed below the minimap. This can be disabled in Settings.