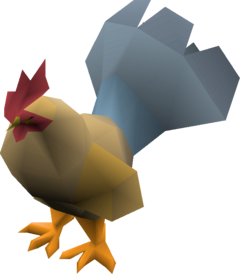 Ernest is the fiancé of Veronica and a central character in the quest Ernest the Chicken. While travelling to Falador, they got lost and ended up outside Draynor Manor. Ernest went inside to ask for directions and ended up testing Professor Oddenstein's latest invention, being turned into a chicken. After an hour Veronica begged a passing adventurer to look for Ernest.[1][2] The machine was damaged by poltergeists, rendering Professor Oddenstein incapable of reverting the results of the experiment. The adventurer managed to retrieve all the pieces needed to restore Ernest to human form, much to the delight of Veronica.

After completing Ernest the Chicken he will give you 300 coins as a reward.