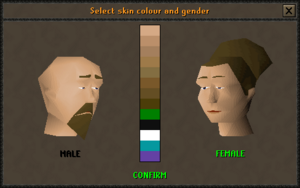 The Makeover Mage can change a player's gender (and skin colour) free of charge.

A player's gender does not affect their skills in any way, and, with minor exceptions, it does not restrict their abilities. In contrast, some NPCs appear to be differentiated (although subtly) by gender. For example, female ice trollss make use of the Ranged attack style, while male ice trolls use melee.

An example of a male character

An example of a female character

Players choose their character's gender when creating their account, either male or female. They can change their gender (and skin colour) at any time via the Makeover Mage near Falador with no costs attached. This flexibility means that the gender of an in-game character does not necessarily reflect the real-life gender or gender identity of the player. However, in a March 2008 poll, 92% of respondents said their character is the same gender as themselves.[1]

The players of RuneScape are not evenly divided between the genders. In February 2008, Geoff Iddison (the CEO of Jagex at the time) claimed in an interview that the player base is "over 60 percent male", though the interviewer speculated that the true figure was likely to be higher than this comment would suggest.[2] Indeed, a poll conducted just one month later showed that 90% of respondents claimed to be male.[3]

In June 2008, Iddison admitted that Jagex's strategy favoured male players but added that "we've got some plans there" to redress the imbalance.[4] Evidence of this appeared beginning in September of that year, when the RuneScape banner across the top of the homepage was changed to feature two female warriors prominently.

After Iddison's resignation from Jagex in January 2009, his successor, Mark Gerhard, played down the apparent imbalance, saying: "I'm not sure I share Geoff's view that there is a large "male" imbalance in the game. I'm aware of numerous women in our clan and I know our player base reflects the population in general, so that's adults, pensioners, children, males and females."[5] This was eleven months after the poll.

Players are generally not restricted on the clothes or armour they can wear based on their gender. For example, both male and female player characters may wear plateskirts, platelegs, and skirts.

Of particular interest is the Vyrewatch outfit, which completely changes depending upon the players gender. Notably, Vyrewatch shoes look like high-heels on female avatars.

Gender plays little role in enhancing or limiting any particular abilities in Old School RuneScape. Prior to the first of the Diversity & Inclusion updates on 9 November 2022, some notable exceptions existed such as the Recruitment Drive quest, which required the player to be female. Male characters would need to change their gender in order to complete the quest; however, this quest rewarded the Makeover voucher, which entitled the player to a free use of the Makeover Mage to change back to male.

Similarly, there used to be a minor restriction based on gender in The Giant Dwarf, which concerned the part where the player must choose a mining company to join. Female characters could not join The Brown Engine, and male characters were unable to join The Yellow Fortune. Characters of either gender could still choose freely from any one of the remaining six companies, except The Red Axe, which no player may join.

During Throne of Miscellania, male characters were forced to convince Princess Astrid to marry them, and female characters were forced to convince Prince Brand to marry them. Players were not at liberty to choose which gender they would prefer to be with, and both Astrid and Brand appeared to be heterosexual as a consequence. If you spoke with Advisor Ghrim after completing Throne of Miscellania as a male and had since changed your gender to female, he would act as if you completed the quest as a female and vice versa.

NPCs often refer to the player using gender-specific pronouns and titles. For example, Rick Turpentine says "Excuse me, Sir/Ma'am" when calling out to the player.

Many NPCs have a well-defined gender, and these are not limited to humans. For example, Aga the troll and Zanik the goblin are female, while Doric the dwarf and Pescaling Pax the penguin are male. We can discern these from the fact that other NPCs refer to them as "she" or "he" respectively.

Low-level NPCs, known only as "Man" and "Woman," are commonly found in Lumbridge and other places. It is equally easy to pick the pockets of either gender, each requiring only level 1 Thieving.

Most regular non-human monsters are genderless - for example, trolls and goblins that are not part of a quest will be gender-indeterminate - but humans will always have some kind of gender-defining characteristic. There are exceptions, however, such as with ice trolls. A very few characters completely lack a gender, such as the Homunculus.

The Makeover Mage has the ability to change between genders whenever they want to, and does so randomly every few seconds.