Mandy is a girl found in the mansion's kitchen during the Misthalin Mystery quest. She is presumably murdered due to a stab to the left side of her chest by the Killer while washing dishes.

Towards the end of the event, she wields a Bandos godsword (which shows that she has an Attack level of at least 75) and kills Abigale while the player is caught off-guard. It is discovered she survived the attack because of her dextrocardia, a rare condition in which the heart points toward the right side of the chest instead of the left side. 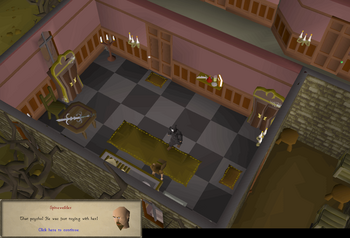 Mandy appears to have been murdered by the Killer.