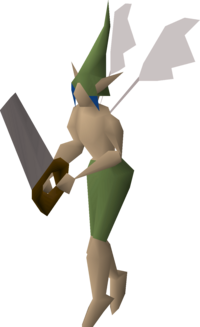 Pixies are a race of small, winged humanoids native to Gielinor. They are comparable to fairies in appearance and nature, the two seeming to have some connection. They featured most prominently in the 2013 Halloween event and 2014 Christmas event. It was suggested in the 2013 Halloween event that Pixies may explode when worked up, possibly a result of their unstable magic.

The pixies, during these events, could be found in their large toy workshop beneath Draynor Village. Here they had been employed by the merchant Diango, although they also hinted the shop was run partially by the notorious Fairy Godfather.