From Old School RuneScape Wiki
Jump to navigation Jump to search
The RuneScape Wiki also has an article on: rsw:Centaur
Centaur? (edit) 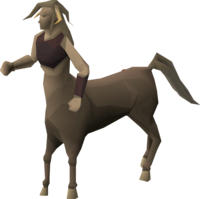 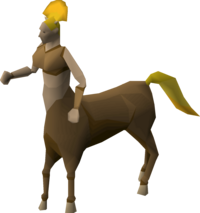 Centaurs are a race of part human, part unicorn creatures that reside in the Enchanted Valley, a place accessible only through the use of the fairy ring transportation system (code bkq).

Centaurs were followers of Saradomin during the God Wars. During this period, they were driven to near-extinction, evidenced by the fact that there are only three centaurs left: two can be found the Enchanted Valley, and one, named Bree, can be found as a Saradomin minion fought in the God Wars Dungeon.