Chuck was a certer in RuneScape Classic, who could provide certificates for logs. Most certers were not converted to RuneScape 2 as they were replaced by the bank note system. For some unknown reason, Chuck was included in the RuneScape 2 beta files. His house can still be found north of the bank in East Ardougne.

Chuck was almost certainly never actually added to RuneScape 2, since he lacks any chathead or options. However, he appeared in Old School RuneScape in the 20th Anniversary event, with an appearance more closely matching his design in RuneScape Classic. 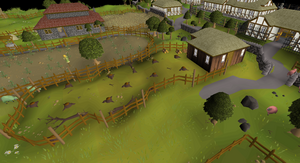 The house and lumberyard north of Ardougne, formerly Chuck's.