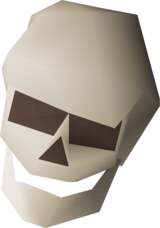 The ghost's skull is a quest item used in The Restless Ghost. It is found in the Wizards' Tower basement by searching the altar.

After searching the altar a skeleton will appear. Killing it is not necessary, and you may run if you want to. Putting the skull back into the restless ghost's coffin will complete the quest.