In response to player feedback, this poll blog has been put together to adjust the content recently released with the Kebos expansion. A further poll to fine tune Konar's loot table will follow in the coming days pending further suggestions and data collection.

As mentioned above in the introduction - we are still examining the data and compiling feedback regarding Konar's table. Once we have sufficient information, a poll will be put together through the usual process regarding balancing the table. To get involved in the discussion, check out the Old School Twitter @OldSchoolRS and get involved in this Reddit thread if you haven't already! All the information regarding the original table and changes that have been made to it so far can be seen in the Konar Loot Table Balancing post.

For those of you not familiar with the new content, an island lies in the middle of Lake Molch in the new Kebos area. At the lake, players can talk to Alry the Angler and begin aerial fishing. This method involves using birds to catch fish from spots around the lake, similar to the falconry Hunter method. Each catch offers a chance of finding a Molch Pearl which can be used to buy fishing related rewards from Alry.

We have been aware for some time that the Fishing Trawler is not the most popular minigame, but is still visited by many players wishing to obtain the Angler's outfit. For reference, each piece of this outfit gives a small experience bonus while fishing with a bonus for having the full set coming to 2.5% in total. We would like to offer the option to obtain this set elsewhere, and the new Aerial Fishing content seems a good fit. However, if this were to be added, it would take longer to obtain the whole set via this new method as the rate of getting pearls is consistent. We also maintain that we would like to improve the trawler in future. To allow for the extra items players may wish to purchase from Alry's shop, we're also offering an increased rate of Molch Pearls gained while Aerial Fishing.

The Golden tench is a rare, equippable cosmetic reward that can be obtained while aerial fishing. There are no uses for excess Golden tench that some lucky players may have obtained or obtain in the future. We'd like to give these some value for players trying to obtain the rewards in Alry's shop.

Currently, Lake Molch is highly competitive for the best spots, resulting in players having to world hop to find space. To avoid this experience, we'd like to offer the option for players to open instanced areas for Aerial Fishing. To maintain the social aspect of the Skill, this could allow players to have the instance open to players on their Friends List. 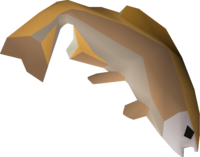 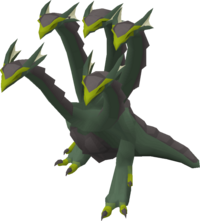 The Alchemical Hydra is the new highest tier Slayer boss that was introduced with Kebos in the dungeon below Mount Karuulm. Many of you have enjoyed testing your skills against this new monster and been receiving some of the coveted uniques it drops.

As it stands, players have to wait 30 seconds between Alchemical Hydra kills. Following player feedback, we'd like to offer the option to control how long they would like to wait between kills. We've also heard the calls for an Alchemical Hydra Slayer helm recolour and Mod West has whipped up the design seen below! 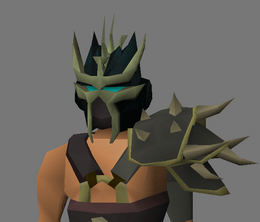 To make the Alchemical Hydra more rewarding to players who have completed the Elite Kourend Diary, we would like to add an incentive to pick up the bones it drops.

At the moment, players who fall to the Alchemical Hydra may recover their items outside its lair for a fee, similar to Vorkath. However, reaching this point requires running past other monsters in the dungeon, causing players to risk losing their items before reclaiming them.

Following feedback on these Slayer creatures found in Mount Karuulm dungeno[sic], we'd like to make the following changes:

We understand that with big releases come lots of new items which results in more pressure to manage bank space. While we're unable to offer increased bank space at this time, we are exploring other options. One of the suggestions we've seen includes a Seed Vault being added to the Farming Guild. If this passes, we could consider other similar storage options for certain item categories in the future.

The Hydra tail is a tradeable unique drop that comes from the Alchemical Hydra. It can be combined with the Bonecrusher and a Dragonbone necklace to create a Bonecrusher necklace. The high alch price of the Hydra tail is currently 900,000 GP which is far higher than we feel it ought to be. However, we are aware that without being tied to something else, it is likely to fall in price substantially after we lower the alch value. With this in mind, we are going ahead with a reduction in the high alch price but would like to offer the following. We will explore other options should the below not pass

The citizens of Kourend’s five houses are well known for working closely with each other. Shayzien soldiers protecting Hosidius farms and Lovakengj smiths producing Shayzien armour are just a couple of examples of this. Currently, earning favour with one house will decrease favour with another unless you have completed Architectural Alliance. This feature does not reflect the thematics of Kourend very well so we would like to change it. We want to make it so that gaining favour in one house does not reduce favour in any others. This will make the favour system fit the lore of Kourend better and will also increase flexibility when earning favour. This change won’t impact the overall time needed to reach maximum favour in Kourend.