From Old School RuneScape Wiki
Jump to navigation Jump to search
The RuneScape Wiki also has an article on: rsw:Boneguard
Boneguard? (edit) 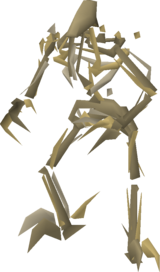 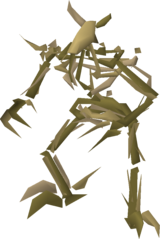 The Boneguards are spirits who have been bound to guard Enakhra's Temple against their will. They are encountered during Enakhra's Lament. The first Boneguard that the player encounters must be defeated with the use of the Crumble Undead spell, allowing the player to climb over its bones. The second Boneguard must be spoken to with the Protect from Melee Prayer activated in order to endure its attacks during the conversation.

When it has stopped attacking, the second Boneguard asks the player to assist it in weakening Enakhra's influence on it by building up the wall using sandstone blocks found nearby. Doing so breaks the enchantment and it is revealed to be the Mahjarrat Akthanakos, archrival of Enakhra. 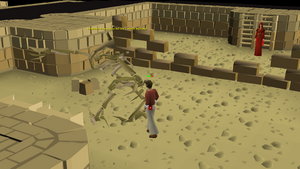