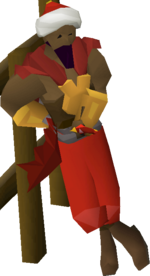 Haris can be found at the far south-west corner of Feldip Hills, near the entrance to the Myths' Guild.

He supervises a small area north of the Myths' Guild containing three yew trees, four maple trees, three cage/harpoon fishing spots and an entrance to the Corsair Cove Dungeon. This is the only area in free-to-play containing maple trees.

He refuses to let anyone pass the gate to this area unless they can tell him sufficiently adventurous tales. If the player has completed the Dragon Slayer quest, he will compliment them on their story and let them access the area.