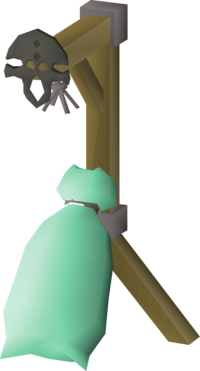 The undead combat dummy can be built in the Combat dummy space of the Combat Room in a player-owned house. It requires 53 Construction to upgrade the combat dummy and when built, it gives 220 experience. The player must have a hammer and a saw in their inventory to build it. The black mask used in construction must not have any charges; charged black masks can be uncharged by right clicking.

In addition to the function of its predecessor (i.e. that the player will always hit their max hit when attacking the dummy), it also acts as an undead creature, a demonic creature, and a Slayer task. Players can use an undead combat dummy to see how their max hit against a monster improves if they use a salve amulet, black mask/slayer helmet, or demonbane weapons.

The experience shown is the total amount accumulated from the base furniture to this built furniture.