Eric is a follower of the demon Agrith Naar, and is involved in the Shadow of the Storm quest. He is one of the dark wizards trying to summon the powerful demon.

He wishes to summon Agrith-Naar so everyone in the world will pay attention to him, and that "She" will stop ignoring him. He is eventually killed by rocks falling from a collapsing ceiling shortly after the ritual is completed. 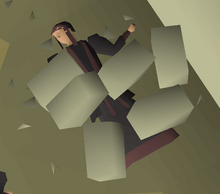 Eric is killed by a collapsing ceiling.