Father Badden is a priest who is involved with the Shadow of the Storm quest.

He is a Saradominist but despises golems by all means and calls them, "unnatural in the eyes of Saradomin." He plays a role in summoning Agrith Naar again. By the end of the quest, he has changed his mind about golems.

The fact he views golems as "foul constructs" and "abominations" is unusual given that Saradominist forces historically used them during the God Wars to battle demons such as Thammaron. 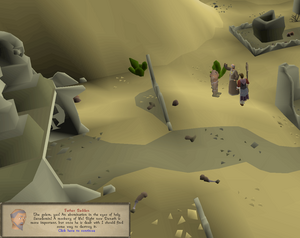 Father Badden expresses his distaste of golems and shakes his fist at one.
Retrieved from ‘https://oldschool.runescape.wiki/w/Father_Badden?oldid=14181012’
Categories:
Hidden categories: