From Old School RuneScape Wiki
Jump to: navigation, search
The RuneScape Wiki also has an article on: rsw:Matthew
Matthew? (edit)

Matthew is one of the Dark Wizards who attempted to summon Agrith-Naar in Shadow of the Storm. Unlike the other dark wizards, he doesn't think Denath is telling them his true intentions, and is found to be ultimately correct later in the quest.

The player must help him find the book Josef has hidden. When he reads the book, he thinks Agrith Naar will kill him and the other dark wizards gathered to summon the demon.

Near the end of the quest, Matthew tells the player to get three more people to help resummon Agrith-Naar after the dark wizards were tricked by Denath. Matthew met his unfortunate end when the resummoned demon killed him with his magic because the demon thought he had directed the other members to resummon him. 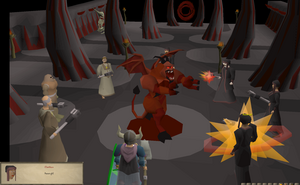 Matthew is immolated by the demon.
Retrieved from ‘https://oldschool.runescape.wiki/w/Matthew?oldid=14181013’
Categories:
Hidden category: