The Citharede Abbey is a small abandoned abbey found on the eastern end of the Giants' Plateau east of Al Kharid. In the past, followers of Saradomin appear to have lived here, but seem to have eventually abandoned the abbey, resulting in it falling into disrepair.

Players can get to the Abbey by teleporting to Al Kharid and running east through the gate, or via the Emir's Arena with a Ring of dueling and travelling south-east. 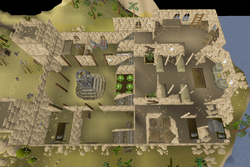 A bird's eye view of the Citharede Abbey.