The Army Commander is the commander of the penguin army. He is training his army for the penguins' planned invasion of RuneScape. He is found at the start of the Penguin agility course.

Access to the Penguin agility course is only available after the completion of the quest Cold War. Players are required to have at least level 30 Agility and must be wearing the Penguin suit. 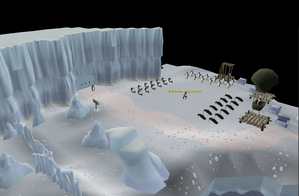 The penguin army are being drilled by the Army Commander for their invasion.
Retrieved from ‘https://oldschool.runescape.wiki/w/Army_Commander?oldid=13967128’
Categories:
Hidden category: