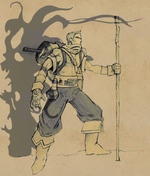 Randas as depicted in Spirit of the Pass

According to the Spirit of the Pass, Randas travelled to the Underground Pass to fufil his desire to become a great and mighty warrior. As such, he was susceptible to Zamorak's corruption.[2] Due to this corruption, he performed an ancient ritual that altered his spirit forever, turning him into a soulless.[3] It is said that he remains in the Pass in this state even today.[4] While several sources corroborate Zamorak as the source of corruption in the pass, it is also likely that Lord Iban is responsible, whose voices and practices coincide with the descriptions of Randas's fate.

Randas at some point through his journey made note of siren calls within the Underground Pass in his diary before becoming a soulless.[5] 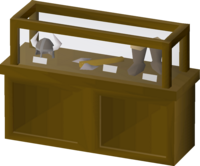