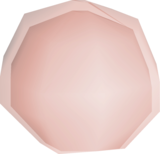 An orb of light, also known as a Sphere of Light, is a magical orb used in Underground Pass quest. The player destroys four of these orbs in a furnace to progress into the next part of the dungeon. Destroying an orb yields the message, You feel a cold shudder run down your spine as the light of the orb fades.

They were placed in the Underground Pass by the warrior, Randas, in a failed attempt to ward off the darkness prior to the player's involvement.

It cannot be banked, duplicates cannot be held or picked up after that version is destroyed. The item spawn cannot be seen by Telekinetic Grab, however, a player-dropped variant can, but the spell cannot be used on it.