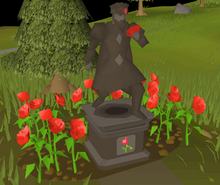 The Old Memorial is a memorial found west of the Woodcutting Guild. The statue is a depiction of the last king of Great Kourend, King Kharedst IV, surrounded by lancalliums, his favourite flower.

Players can recharge their filled Kharedst's memoirs/book of the dead at the statue by using the book on the statue or inspecting the statue. A dialogue will appear with a quote:

This requires at least 1 law, body, mind, and soul rune, costing 324 per charge. 10 Magic experience is granted for each charge added to the memoirs.

The best way to get here is by using the Rada's blessing to teleport to the Kourend Woodland or by teleporting to Xeric's Lookout, using Xeric's talisman and running south-west.

Players can also teleport to the woodcutting guild and run west, or run north after taking a ship to Land's End.