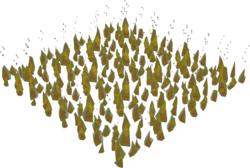 The animation of a flame pit once constructed.

A flame pit can be built in the Floor space of the Oubliette in a player-owned house. It requires 77 Construction to build and when built, it gives 357 experience. The player must have a hammer and a saw in their inventory to build it.

A Flame pit hits constant 1-3s while any players are in the trap; a lever must be built in the throne room above for the flame pit to deal damage. It is popular for killing players in the prison, as it deals consistent damage compared to the tentacle pool and the rocnar.

A flame pit can be built at level 69 construction if using the Crystal Saw and a +5 boost from a Spicy Stew. Some players use the flame pit to suicide, as a cheaper alternative to the Ornate rejuvenation pool; as players do not lose their items upon death in a Player Owned House upon death the player will have their stats restored, poison or venom cured, and restore special attack and prayer points. Dying in this method will also remove a PK Skull.