The Fall of Six

Anonymous author, adapted from a crumbling tome found at the site of the Barrows. Original date of writing unknown. 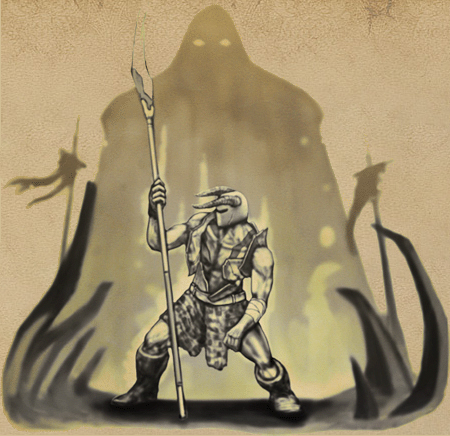 I recently received a remarkably tattered manuscript from a strange old man who lives in deepest, darkest Morytania. This scroll was evidently ancient and contained an intriguing new angle on the famous legend of the Barrows. I'm not entirely sure of the significance, but the man signed his letter off with the words 'Dig dig dig' - perhaps he has lived in Morytania too long.
- Reldo

The stranger had watched the campaign from its first footfall into the lands east of the river, always from afar. His lidless eyes were affixed to the six commanders, resplendent in their armour, their weapons poised to attack as yet unmet foes. Behind each commander, a phalanx of war-hardened soldiers, their metallic armour glinting even in the pale light of these dead lands – brilliant fingers of light inching towards the heart of Hallowvale.

The six were brothers, hailing from one of the smaller townships of Misthalin – they had shown a glimmer of prowess in combat even back then, though their chores as farmers chewed up much of their time. If they had been born in another age, their lives would have been filled with thankless obscurity, but in this age of the God Wars, there were many opportunities for such men to earn renown.

Their thirst for fame is what led the stranger to them, for although their skills were unmatched in their township, they desired to be the best of all men, and the stranger had promised them this, for he knew power and could grant it. His long years had taken him to many distant lands where he had collected much arcane knowledge and many artefacts of value and strength, and it was those very weapons and armours he had given them, that they now wielded, which granted them their desire. If they had not been blinded by such desires, had heard the deviousness in the stranger’s voice, or could have seen the calculating eyes hidden deep within the dark recesses of his cowl, then they may have taken a different path.

The campaign moved with great speed, deeper and deeper into the darkness; for a year, many battles were fought like the one the stranger now watched below. The phalanxes engaged the rank and file, spurred on by the brothers’ fearlessness and courage, while the brothers themselves squared up to the enemy champions. Ahrim, the eldest brother, crumbled his foes with powerful magics, and sapped their strength and their will to fight. Dharok and Guthan, the next eldest, did not need their foes to be weakened to decimate them – great axe cleaving limbs from bodies, spear skewering organs.

The brothers were strongest when united, fighting side-by-side or back-to-back. Should any enemy manage to survive long enough, and have the chance to strike a blow, Karil would fire a swathe of bolts to pepper their chest as they took their swing, throwing them back. This battle was the campaign’s most unrelenting and bloody – the brothers’ confidence and skill had grown over the years as the power they wielded made them feel invincible, made them living heroes to their followers. The straggling enemy survivors were routed, but even they were cut down – try as they might to flee, Torag pounded them into the dirt, and their prayers rang hollow as Verac flayed the skin from their bones. Another victory.

A thin smile slowly curled upon the stranger’s mouth, snagged teeth protruding, and he thought, Truly, they are worthy - now is the time, before he slowly and deliberately turned heel and made his way down from his cliff top perch to the battlefield remnants below, and the camp the brothers’ army was now constructing.

Dusk had settled by the time he arrived at the camp; there was much song and laughter, rejoicing of the day’s battle and stories of valour. Various beasts were slowly roasting on spits over open fires, the crackling lost among the din of celebration, sparks dancing in the cool half-light. He picked his path through the piles of litter of the camp but his path was always directly towards the brothers. As more became aware of his presence a silence enshrouded the camp, as if the stranger himself were holding their mouths shut.

To the surrounding army it looked no more than the robed stranger staring into each of the brothers’ eyes, but to the brothers it was the realisation of their fate. They froze, in unison, as if caught in the path of a crushing wall of water, finally understanding the cost of the deal they had struck with the stranger. Misthalin now felt so very far away; a different land, a different time. The brothers, once united by blood, and by bloodshed, and by the pact they had taken together, now stood alone. Their power had separated them from other mortal men, now it had separated them from each other.

The silent stranger’s message could be heard only in the brothers’ minds – a raspy, conspiratorial whisper: The time has come, my warriors. The gifts I bestowed upon you have served you well, and you, in turn, have served your god. Now, it is time to begin your servitude to me...to my god. You shall stand ever vigilant for His return, and then you will be champions in His glorious army - we shall have victory against the usurper. But first, you must die...

The brothers flinched back, hands tightening on weapons, but the stranger did not attack. After this briefest of moments to the onlooking soldiers – a lifetime to the brothers – the stranger turned and strode to the edge of the camp, back through the charred remains of the defeated and the victorious dead. The brothers just stood and watched, in shock, as the odd figure disappeared from the camp, delving into the shadows at its edge, but the silence remained and with it now a palpable tension, the air thick with doubt and unease. The stranger returned once again to his perch above the battlefield and watched as the last of the light fell from the sky and as the campfires burnt themselves out.

The rays of morning slowly crept around the camp, like a beast stalking its prey, stirring the army to wake. It went some way to renewing the soldiers’ hope, but the brothers themselves remained silent, as if they had absorbed all the doubt and despair their followers carried the previous night. Camp was broken and the retinue continued its journey further still towards the heart of these dark lands. Despite the meeting with the stranger, the brothers still had their purpose, and even though they now knew its full extent, they continued bravely on, resigned.

Yet more battles followed that fated night, the enemy growing in number and strength, the stranger now clearly visible in his observation of them, no longer concealing his presence. The brothers continued to fight, as heroes among men, yet they slowed, they erred. Ahrim’s spells would miss, Dharok’s strength declined and Guthan weakened by the day. Karil no longer managed to stay the blows of his targets, his brothers receiving wounds before he could fill their enemies with bolts. Torag slowed, and Verac seemed to instil less fear in his opponents. They bruised and bled, requiring tending from their medics after each skirmish.

Now, at the heart of this accursed land, as the sun fell low in the sky, the stranger watched again as they pitched their final camp, watched as they rested...and watched as the marshalled forces of their enemy crashed upon the camp – demons, wolves and hounds, undead creatures and other such horrors. The brothers fought bravely one last time, rallying their troops to them, fending off the dread beasts’ raid. Many men fell around them, yet, despite their losses, together they managed to set the enemy to retreat, striking a heavy blow in return.

At first light the camp was refortified, but the brothers fell around their campfire. All morn and eve, they were tended upon once more, but this time they did not recover. Muttering feverishly, their wounds did not close and their breathing weakened. Even in the act of dying they fought against the darkness, clinging to all the life they could, but much as the sun above giving way to night, so too was their fate inevitable. As the last rays of light failed, so too did the brothers and the campaign with them. Sorrow and despair now afflicted the camp. The remaining officers came to the realisation that without their leaders they were lost and must now turn back if there were to be any hope of survival, but as a reflection of the brothers’ bravery, they vowed to honour their martyred heroes as a final act before retreating.

For six days, the survivors dug up the earth and built crypts for the brothers; for six nights, their enemies surrounded the camp, chiding and braying, mocking the loss of their leaders, breaking their spirit but not attacking. The stranger took no joy from this – he had no love for either side – his involvement complete. On the last day, he watched the crypts being covered and the burial mounds completed, and the remnants of the brothers’ army turn their back on the dark to begin their long journey home. As they passed from view he turned, again walking deliberately and slowly towards the brothers, now dead and interred in their barrows.

Arms outstretched atop the central mound, the stranger chanted in some foul, ancient language, casting his old magic. A vulgar purple light formed in front of him, fell to the earth, and bled into each of the barrows.