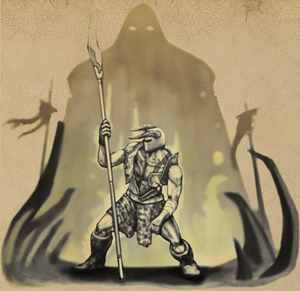 Sliske is a mysterious Zarosian Mahjarrat responsible for giving the Barrows Brothers their equipment and subsequently raising them as undead wights. He is referred to as "Sliske the serpent-tongued, who delves the shadows" by Azzanadra in the 20th Postbag from the Hedge[1] and appears as a mysterious figure in the crumbling tome.

Sliske was the one who tricked Ashuelot Reis and her comrades to freeing Nex from the slumber.[2]

Sliske got involved with six Misthalin small town brothers, now known as the Barrows brothers, by making a pact with them, in which he would supply them with powerful artefacts and arcane knowledge.[3] In return, the brothers had to serve him once they were worthy.[4].

Sliske's given armour and weapons made the brothers incredibly powerful, but this would ultimately lead to their doom. By the time the Morytania Campaign started, the brothers were near invincible, annihilating the enemy, all while Sliske was secretly watching over his later-to-be servants.

Once he deemed them worthy, he visited the camp and told the brothers that the time had come to fulfill their side of the pact, to die and become mighty Zarosian warriors. [5]. Upon hearing this, the brothers were weakened, and as the campaign pushed onward, their strength waned until at last even the mighty six fell to the enemy.[6] The comrades of the six buried them into the barrows and returned to their homeland, unable to advance without the mighty six.[7]

After the burial of the brothers, Sliske cast an ancient necromancy spell to animate their lifeless bodies to serve his god, Zaros. The brothers now reside as half-living bodies, summoned with rage and power to kill anyone that might disturb the peace.[8]