From Old School RuneScape Wiki
Jump to: navigation, search
For the NPCs encountered during the Shadow of the Storm quest, see sand storm.
Grinder 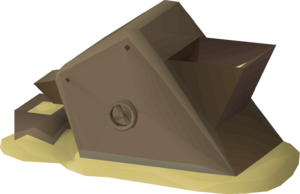 The Sandstorm is a grinder found west of the quarry, operated by Drew, which grinds sandstone into buckets of sand.

To use this machine, players must deposit empty buckets (notes are accepted) with Drew, and must load the machine with sandstone, with heavier pieces of sandstone resulting in more buckets being filled with sand. They can then claim noted buckets of sand from Drew for 50 coins each. Drew can hold up to 25,000 empty buckets for a player and the machine can store up to 25,000 buckets worth of sand.

According to Drew, the machine was stolen from the Desert Mining Camp, where he was enslaved and tasked to look after it. While the guards weren't looking, he took apart the machine and stashed its pieces in boxes and barrels, and tricked the mine cart driver by telling him jokes. This references the method players use to smuggle Ana out of the camp during The Tourist Trap.