Unicorn1337Kilr is a spoof of an adventurer occurring during the 2021 Birthday event. He kills a unicorn that was in a fight with the monkey riding a unicorn, stealing the monkey's kill.

He has a combat level of 73 (though he is unattackable), and wears a rune platebody, rune plateskirt, fancy boots, Rune med helm and a Rune 2h sword. His name is a reference to the player spoof Cow31337Killer, meaning "Unicorn (e)lite killer". 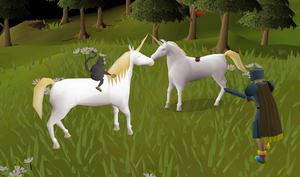