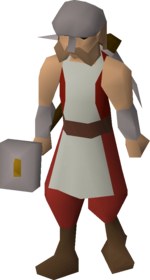 Doric is a dwarf that lives in a small hut north of Falador and directly east of the Taverley gate. He plays a minor role in the Devious Minds quest but is mostly known for his quest called Doric's Quest. His hut contains an anvil and a whetstone.

Doric's anvils are the closest to the Dwarven Mine. He has a steel pickaxe on his back. He is the self-proclaimed best maker of pickaxes in Gielinor, but he has a running order with Nurmof and will not sell the player any.

Doric maintains a small wheat garden north of his hut. Occasionally, the Puro-Puro portal will open there, resulting in a crop circle.

Doric's name is possibly a reference to the English dialect of the same name spoken in the north-east of Scotland.