The assassin is an operator who stole a relic from Entrana.

Theft of the Relic[edit | edit source]

The assassin disguised himself as a monk near the Paterdomus, a Saradominist temple on the holy River Salve. Here, somehow avoiding the aggressive Monks of Zamorak that had taken the temple, he claimed to be searching for someone that could help him craft a mysterious weapon known as a "bow-sword". A passing adventurer takes the "monk" up on his request.

After crafting the bow-sword, he instructed the adventurer to take a sphere to the holy isle of Saradomin, Entrana. Claiming to be one of their order, he said the sphere was a gift for a religious festival soon to be held on the island. Wanting the true nature of the sphere to remain a secret, and as simply taking a ferry Port Sarim would potentially risk revealing the sphere to the ships' crewmen, he requested the adventurer to take it through the Abyss, arriving on the island via the Law Altar. 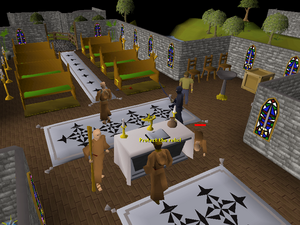 The assassin attacks the church's congregation.

As the monks readied themselves, the assassin teleported in, now wielding the bow-sword. The assassin immediately attacked its congregation, slaying several members of the order. Stealing a relic from the altar, he teleported from the island. The sphere, discovered to be a teleportation beacon, had been designed solely to give the assassin immediate access to the island. After the adventurer rushed back to Paterdomus to confront the monk, they found what at first glance appeared to be his body. However, this was simply another monk the assassin had murdered, to conceal his identity.

The adventurer, realising what they had done, informed Sir Tiffy Cashien of the Temple Knights of the event. Sir Tiffy, claimed to already be aware of the situation, launched a Temple Knight investigation regarding the attack.

The assassin later headed to Weiss to obtain an unknown artefact for his employer. Before he did so, he went to Ardougne and slew Ceril Carnillean and placed the blame on Evelot, a Khazard soldier. This initial attempt to divert attention failed as the adventurer who previously helped him enlisted the help of two Mahjarrat — Hazeel and General Khazard, both of whom denied killing Ceril. The assassin discovered an ancient fortress underneath the troll settlement of Weiss and ambushed the adventurer and Khazard, but was forced to hide after being overpowered by them.

The assassin remained in the ruins and witnessed the adventurer defeat a Strange Creature, later revealed to be the Mahjarrat Jhallan in disguise as a muspah. Before Jhallan could question the adventurer, the assassin teleported in and captured Jhallan before leaving. As the adventurer reported to Hazeel and Khazard, the assassin was also able to remove the ancient seal guarding one of the fortress doors, so Khazard placed a regiment of his soldiers in the fortress to stand guard.